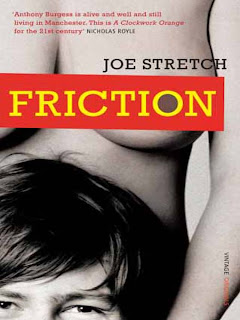 
Acquired: Sent to me by the lovely Fiona at Random House

“Life in Manchester is sexy and stinking. Hold your breath.” So begins the blurb of Stretch’s debut novel, Friction. Believe me, I was holding my breath. Books about illicit sex between attractive twenty-somethings generally seem to disappoint and, to be honest, my expectations of Friction were not particularly high. However, Stretch’s writing style is infectious, his characters brilliantly crafted and his story electric.

Friction is the story of six characters, told by a nameless, faceless narrator who is holed up in an Orwellian asylum, pondering each person’s relationship with sex. We have Carly, the ‘fit as fuck’ sex mad girlfriend of Steve, who only cares about money and cool haircuts. Their relationship is based around sex, cash and a constant power struggle, particularly when Steve finds himself second best to Carly’s newly acquired sex machine.

Justin and Rebecca start off as strangers but, after Justin inherits sixty thousand pounds he teams up with stripper (and Dostoevsky enthusiast) Rebecca and together they seek out ‘brand new ways of having sex’, which take a dangerous turn when Colin, a lonely psychopath who lives in a rat infested apartment, gets involved. And finally there’s Johnny, the virgin. All his wants is sex, preferably with Rebecca.

Something that really interested me was the narrator’s tone of voice. He genuinely seems as though he can’t really be bothered to tell the story. Any secondary characters are given the simple monikers of ‘Boy 1’ or ‘Girl 2’ and he frequently ends a sentence with ‘blah, blah, blah’, as if it doesn’t really matter what exactly is going on, as long as we get the gist.

By the time I’d finished the final chapter I was feeling a little depressed. Everything just seemed so hopeless and I couldn’t help but think the consumer-driven, hateful world depicted in Friction is not so different from the world we’re living in today. Maybe it’s only a matter of time before we ditch our men and parade around strapped to a Japanese sex robot. Then again, maybe not.

The epilogue, though, was a stroke of genius and elevates this novel from an average debut to a work of art. With the new slant on things the epilogue gives us, I suddenly saw Friction in a whole new light and realised what a clever writer Stretch really is.

On the surface Friction seems like a quick, sexy read that you can flash through in a matter of hours but if you look a bit deeper you’ll find the sort of excellent writing that so rarely finds its way into an author’s debut novel, particularly one as contentious as Stretch’s first effort. Friction is controversial but it doesn’t rest on the shock factor. While reading Friction I was reminded, more than once, of J. G. Ballard’s fantastic style and I thought of Crash many times which, in my opinion, can only be a good thing.