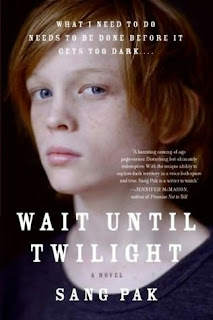 Acquired: Sent to me by Curled Up With A Good Book (original review can be found here: http://www.curledup.com/waittilt.htm)

, and I was slightly apprehensive that his writing wouldn’t live up to the hype. Luckily, he more than exceeded my expectations. I can safely say that I’m a convert to his dreamy, lyrical prose and true to life characters.

Sixteen-year-old Samuel lives with his father in a small Georgia town where secrets are few and far between. However, Samuel stumbles across a hideous secret that haunts him in his dreams and obsesses him in his waking hours. Three horribly deformed triplets are being hidden by their mother, who believes they were immaculately conceived. Samuel realizes that he must save the triplets from their troubled mother and terrifyingly unhinged older brother, but to do so, he has to first face the monster inside himself.

I don’t think I can sum up the tone of the novel any better than the blurb on the back of the book, which reads:

‘This psychologically complex story of survival and self-determination explores the dark, often contradictory worlds of young contemporary life, laying bare the ugly truths and secrets that haunt us all.’

So what is it that makes Pak’s story so captivating? It’s a combination of the beautifully lilting prose and fantastically written characters, who are so realistic that one can’t help but think they must be based on people Pak has known in his life - that and the fact that Pak takes an extremely strange story and makes it easy for readers to relate to his protagonist. Without any personal experience in trying to save three deformed babies, the reader nonetheless knows exactly what Samuel feels every step of the way.

Samuel’s voice is incredibly strong for a sixteen-year-old boy. On one hand, he’s happy to hang out with his friends and pretend to like the taste of beer; on the other hand, sometimes his inner thoughts are so complex that it’s like reading about somebody years older. Here Samuel tries to reason with the darker side of himself:

‘I just want to do everything I can to bring my reality back together again, anything to forget what I saw…what I did…and get back to normal. Don’t even think about it, I tell myself. It’s over anyway. Keep it normal, I say to myself. Normal. Normal. Normal. No, don’t say it too much or it sounds strange.’

Purely because of the strange subject matter, Wait Until Twilight

is not the kind of book I would be drawn to buy in a bookstore, but I found it absolutely fascinating and would definitely recommend it to anybody who loves tension and mystery in their books. Sang Pak is a name to watch. I’ll certainly be looking out for his novels in the future.