So, you may or may not know that I'm an absolutely massive Lost fan. I've been ridiculously excited about the premiere of season 6 (the last season, sad face) pretty much since the end of season 5 and I finally watched the first two episodes last night with my wonderful boyfriend Mark (aka Faraday), number one Lost fan Matt (Jack lover) and a bottle of champagne.

Yes, yes, they're not on Sky 1 in the UK 'til tomorrow, I'm a bad person but it totally would have been spoiled if I hadn't watched it early. Don't worry though, I'm not going to post any spoilers until Saturday, by which time everyone in the UK will have had a chance to watch it. I'll put a big massive *SPOILER* warning at the top of my post so nothing will be ruined for anyone.

All I will say, though, is I absolutely adored it. It was brilliant, brought up some awesome questions and I just know this series is going to be amazing already. Ahhh, so good, so confusing as always but excellent!

I'll be back on Saturday morning with an in depth review of the first two episodes, a list of things to think about before next week's episode and my list of predictions for season 6. Until then, namaste (I am a geek, I do not care). 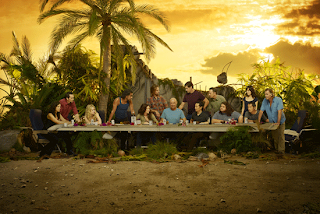