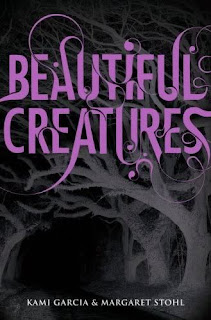 Published: 4/2/10, Puffin
Acquired: Sent to me by the lovely people at Puffin

Publisher summary: In Ethan Wate’s hometown there lies the darkest of secrets... There is a girl. Slowly, she pulled the hood from her head. Green eyes, black hair.

In the end, there is a grave.

Lena and Ethan become bound together by a deep, powerful love. But Lena is cursed and on her sixteenth birthday, her fate will be decided.

Ethan never even saw it coming.

My summary: Gatlin is a stereotypical Southern town, filled with small minds and little controversy. That is, until Lena Duchannes shows up to stay with her reclusive uncle, known as Old Man Ravenwood to the locals.

Lena’s arrival brings change to Gatlin and, as strange things start happening, the folk of Gatlin turn on Lena and her uncle. Only Ethan stays by her side, being drawn closer to her by an unknown force that both intrigues and terrifies him.

By the time he learns Lena’s terrible secret he is in too deep to let her go. But how can their relationship survive when Lena must make a shocking choice that affects not only Ethan but the fate of her entire family.

What I liked: Let me start by saying one of my favourite things about Beautiful Creatures is the way that every time it begins to feel like a love story I’ve read tens of times before something happens to remind me that this is not your ordinary teenage tale of love. Beautiful Creatures is something unique and it’s brilliant in every way. The characters are great, the story is great and the writing is second to none.

So, onto the characters. At first I thought Lena was going to go down the Bella Swann road of being ‘quirky’ and clumsy, to the point of really, really irritating me. Fortunately, Lena is a strong female lead. Quick witted and intelligent, I really found myself rooting for her. Ethan’s also another strength in the novel. He’s a brilliant narrator and it was a nice change to read a love story narrated by a male character.

However, my favourite characters are undoubtedly Amma and Macon. They are both sheer brilliance and, if anything, I’d have liked for them to have had a little more page time. Lena’s oddball (to put it loosely) family are also a delight.

Although I was gripped from beginning to end, the final chapters of Beautiful Creatures stood out to me as being the best. I read the ending on a packed commuter train on the way home from work and, honestly, even though I was being jostled relentlessly the entire time, I wasn’t actually on the train, I was in the story right until the final page. Managing to distract me from the hideous rush hour commute home is a feat unto itself so congratulations must go to the authors for putting together a fantastic ending.

What I didn’t like: There wasn’t actually much I didn’t enjoy about Beautiful Creatures, I’ll be honest. The host of cheerleading girls who terrorise Lena at school were absolutely vile but that was clearly the point of them, so mission accomplished to the writers for that.

I suppose the only thing that did grate on me was the colloquialisms in dialogue throughout the book, particularly with Amma. It’s a personal thing but it’s something I’ve never been keen on so it did put me off a little. Also, I know Gatlin is supposed to be a typical Southern town but there were too many references to this throughout the book for me. I got the ‘Small Town’ stereotype in the opening pages so I didn’t need quite so many reminders.

Oh, and one more thing. It may just be me but another pet hate is perfectly demonstrated in the following quotation:

Yes, I understand the books are old. I don’t need every single word to be stuffed with extra ‘y’s and ‘e’s to get that. Rant over.

My favourite quotation: ‘She nodded to the room. “‘Without libraries what have we? We have no past and no future.’ Just ask Ray Bradbury. Or go to Charlotte, and read it for yourself on the wall of the public library.” Macon took Marian’s arm, but she wasn’t finished. “And he didn’t go to Harvard, either, Mrs. Lincoln. He didn’t even go to college.” With that, they were gone.’

Final thoughts: Beautiful Creatures is a dizzying story of love, where the twists are tighter, the characters are sharper and the stakes are higher. Do not miss this book.

Read if you like...: Fallen by Lauren Kate, The Vampire Diaries by L.J Smith

Total: 16/20 (This rating would have been much higher but unfortunately the cover let it down for me)
Posted by CarlyB at 21:53