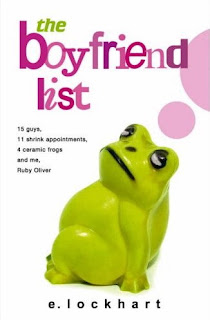 Acquired: Bought by myself


“Agonizingly funny” was what Girl’s Life Magazine called The Boyfriend List and, although I generally don’t agree with such displays of hyperbole, this time I was in complete agreement. The Boyfriend List (and it’s sequel, The Boy Book) is a laugh out loud, honest look at teenage life and all its complications.

Our heroine is the brilliant Ruby Oliver, who is definitely one of my favourite teen protagonists; she’s a real breath of fresh air in the sea of perfectly manicured leading ladies we’ve become accustomed to seeing in young adult fiction.

The Boyfriend List is the story of Ruby’s experiences (or perhaps lack of) with the opposite sex, starting from the very beginning and not leaving anybody out (however unpleasant the memory may be). The Boyfriend List was an assignment given to her by her shrink, Doctor Z, and was supposed to make things easier. However, as we find out, the list causes Ruby nothing but trouble, especially when her list of conquests finds itself in the hands of her old best friend (and super bitch), Kim.

One of the things I loved so much about The Boyfriend List is Lockhart’s writing style. From the outset I felt as though me and Ruby were old friends, catching up on gossip after time spent apart. Lockhart’s tone is so familiar and friendly that you can’t help but get caught up in Ruby’s (complicated) world.

The footnotes are another excellent part of the book. I’ve seen them used in numerous young adult books but never as well as Lockhart uses them. They’re used sparingly, which is important to stop the joke wearing thin and lift the book beyond the confines of your average teen story of an awkward teen struggling through high school.

There are a lot of male characters in this book. Ruby’s list consists of exactly fifteen specimens but Lockhart manages to create a host of unique characters, each with individual flaws and merits that helps bring them to life.

However, where the male characters are so strong, I felt the girls were a little lacking in both character and charm. Meghan seemed to have as much personality as a beige sock (although she comes into her own in The Boy Book) and Cricket wasn’t much better. For somebody with such great characterisation skills, I felt a little let down by Lockhart’s lack of creativity for the girls.

Uninspiring female characters aside, I loved The Boyfriend List, devoured its sequel in a matter of hours and am eagerly awaiting the third instalment in the Ruby Oliver series (as long as Ruby and Noel end up together that is).