Review - Some Girls Are: Courtney Summers 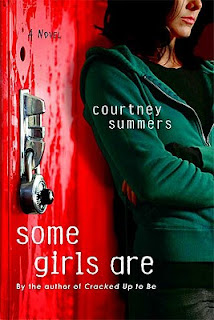 Acquired: Sent to me by Sharon at Curled Up

Publisher summary: Climbing to the top of the social ladder is hard--falling from it is even harder. Regina Afton used to be a member of the Fearsome Fivesome, an all-girl clique both feared and revered by the students at Hallowell High... until vicious rumors about her and her best friend's boyfriend start going around.

Now Regina's been "frozen out" and her ex-best friends are out for revenge. If Regina was guilty, it would be one thing, but the rumors are far from the terrifying truth and the bullying is getting more intense by the day. She takes solace in the company of Michael Hayden, a misfit with a tragic past who she herself used to bully.

Friendship doesn't come easily for these onetime enemies, and as Regina works hard to make amends for her past, she realizes Michael could be more than just a friend... if threats from the Fearsome Foursome don't break them both first.

Tensions grow and the abuse worsens as the final days of senior year march toward an explosive conclusion in this dark new tale from the author of Cracked Up To Be.

My summary: Regina Afton used to have it all. One of the most popular girls in school with a gorgeous boyfriend, she never had to worry about not fitting in. Instead, she made the lives of others hell, along with her cruel best friend, Anna.

However, after things go wrong at a house party the rumours start to fly and, before she knows it, Regina has been cast aside by her old friends and the torment begins. But Regina isn’t one to lay down and take it. She gives as good as she gets but things take a turn for the worst when the abuse gets serious and she suddenly realises it’s them or her. Things will never be the same again.

Regina is a great protagonist, simply because she’s so tough. Lately I think we’ve all gotten used to delicate heroines who need nothing more than to be wrapped in cotton wool and adored by a pretty boy. Not Regina. Her ex best friend starts terrorising her so what does she do? Terrorises her right back. Brilliant. Maybe not morally right, but brilliant reading nonetheless.

The story is great too and Summers isn’t afraid to pull out all the stops and shock her readers, which is something I really appreciate. She doesn’t gloss over the less desirable aspects of teenage life and when her characters do something, they really go for it, which makes for an explosive novel.

What I didn’t like: I loved Some Girls Are, so there isn’t much I can criticise. However, Regina spent years taunting Michael and generally trying to ruin his life. She really, really tormented him. So I found it a little disappointing that she batted her eyelids and cried a few times and he seemed to forget exactly how hard she made his life. That said, I do like a good love story so I wasn’t too put off.

Favourite quotation: ‘Hallowell High: You’re either someone or you’re not.’

Final thoughts: This book pushes the boundaries. At first it seems like your typical high school power struggle between two beautiful girls but it’s so much more than that. Some Girls Are reminds us all just how cruel teenage bullying can be and shows us what can happen when one person decides to stand up and fight back. Fantastic.

Read if you like...: A Match Made in High School - Kristin Walker