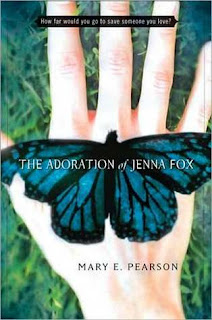 Acquired: Sent to me by Walker Books

Summary (from Goodreads): ‘Who is Jenna Fox?

Seventeen-year-old Jenna has been told that is her name. She has just awoken from a year-long coma, and she's still recovering from the terrible accident that caused it. Her parents show her home movies of her life, her memories, but she has no recollection. Is she really the same girl she sees on the screen?

Little by little, Jenna begins to remember. Along with the memories come questions—questions no one wants to answer for her. What really happened after the accident?’

What I liked: I think one of the most alluring things about The Adoration of Jenna Fox is that we uncover Jenna’s secret at the same time she does. We’re with her every step of the way, from her slow and painful recovery to the moment she finds out about her hideous past and I think Pearson’s excellent use of the first person helps a great deal with this.

I genuinely liked Jenna as a character, which is always so important, especially in a novel like this where she is the entire focus of the book. I cared about her past, I cared that she was going through such a traumatic time and I wanted more than anything for her to have a happy ending. I wanted her to fall in love and move on from her past and be free to make the most of the life she has left.

The Adoration of Jenna Fox is a very visual novel. Pearson’s writing reminded me a lot of Robert Cormier (one of my favourites!) and that’s something I’ve always thought about his work too. I could completely visualise every scene and think this is a story that would translate excellently as a film, particularly the scenes between Lily and Jenna, which I did shed a tear at from time to time (another one that made me cry – it’s getting ridiculous now!).

In today’s young adult market we can’t move for sci-fi novels set in ‘a future closer than we think’ and often I find one novel is just a poorly written rip off of another. I’m pleased to report that Jenna Fox is completely original and I haven’t read anything like this one before. Of course there were elements that reminded me of other novels, as I mentioned Robert Cormier’s voice earlier, but this isn’t something that put me off at all. Pearson has her own writing style, her own ideas and her own wonderful characters. This is the first thing I’ve read of Pearson’s but I’ll certainly be checking out more of her books in the future.

Finally, as a huge Lost fan, I can’t resist pointing out how happy it made me that Jenna’s father was called Matthew Fox. Simple things, I know.

What I didn’t like: I’m a reader who likes to be gripped from the very beginning. I like a punchy first sentence and a big reveal in the first chapter. Unfortunately The Adoration of Jenna Fox is slow to start and it wasn’t until I was almost a third of the way through that I really got into it. I knew I wasn’t enjoying the beginning when I kept putting it down after a few pages and had to force myself to read on.

Another slight gripe with this one is the character of Dane. I felt as though he was set up to be mysterious, sexy and a possible love interest for Jenna. However, his character fell completely flat and I found myself skipping over the exchanges between him and Jenna. Ethan, however, was much more up my street!

First line: ‘I used to be someone. Someone named Jenna Fox.’

Final thoughts: Edgy and unique, I couldn’t help but be drawn into Jenna’s world, where she learns just how far people go to protect the ones they love.

Read if you liked...: The Declaration – Gemma Malley

Cover: 5/5 (every cover I’ve seen of this one has been gorgeous!)