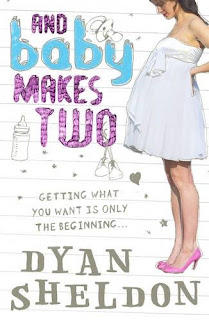 Acquired: Sent to me by Walker Books


What Lana wants is to be grownup. She wants her own flat, her own husband and her own children - and then no one will be able to boss her around any more. When Lana meets Les on her fifteenth birthday, she knows he is the one. And when she gets pregnant without even trying, she knows it's her ticket to freedom - even though everyone else calls it a prison sentence.

But can her dream of Happy Families stand up to reality?

What I liked: My love for Dyan Sheldon’s books began many years ago with Confessions of a Teenage Drama Queen and ever since then I’ve devoured many of her classic teen stories. And Baby Makes Two was released nearly ten years ago but I’ve only just gotten around to reading it and, just like all of Sheldon’s other books, I loved it.

I think one of the most noteworthy things about this book is that it was released nearly ten years ago but it felt fresh, current and I wouldn’t have been surprised if it was a new release this year. Sheldon makes a few references to pop culture but they’re all timeless and don’t date the novel at all, which is a real skill, especially when she mentions music, which I think is always tempting but dangerous if not done correctly.

Fifteen year old Lana is sick of her mother telling her what to do, making her do chores around the house and constantly checking on her school grades. She knows what she needs to do to break away from her family and go it alone – get pregnant.

Of course, to the reader this is clearly a ridiculous idea but I love that the book is written in first person so we hear Lana’s thought processes throughout the entire story and that she genuinely believes it will be easy to look after a newborn baby, when she clearly can’t look after herself.

I think Lana’s mother was extremely well written and I did sympathise with her, even though it’s clear she has her own faults, she probably develops the most out of all the characters and by the end of the novel I really had warmed to her.

What I didn’t like: Lana, however, I did not warm to and this is one of the first instances where I really disliked the protagonist but still loved the book. It didn’t seem to matter that Lana was a self-centred, spoiled little drama queen who didn’t give a second thought to anybody else in her life, including her baby.

Lana really is the stereotypical teenage mum who thinks having a baby is going to grant her an easy life of benefits and a council flat. *Rage*. In fact, I think taking such a dislike to Lana fuelled my enjoyment of the book as seeing her go through such a hard time made me feel a little better that she didn’t get away with being so cruel to the people around her.

Another slight grievance I had is that the book ended a little abruptly. I think it was a good ending and a nice resolution that tied up the loose ends but I’d have liked to have seen a little more action afterwards, to see how the ending impacted the characters involved. An epilogue set a few months later would have been a nice touch.

First line: 'In many ways, the twenty-fifth of October was an ordinary day, which means it started with a fight with my mother and carried on from there.'

Final thoughts: A story of teen pregnancy that any fourteen year old girl who thinks having a baby is a walk in the park should be forced to read.

Read if you liked...: Dear Nobody by Berlie Doherty.