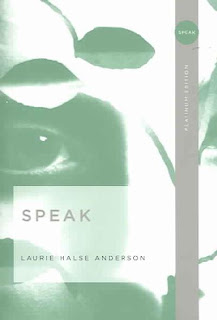 Summary: Melinda Sordino busted an end-of-summer party by calling the cops. Now her old friends won't talk to her, and people she doesn't even know hate her from a distance. The safest place to be is alone, inside her own head.

But even that's not safe. Because there's something she's trying not to think about, something about the night of the party that, if she let it in, would blow her carefully constructed disguise to smithereens. And then she would have to speak the truth.

What I liked: Well, I can’t believe I’ve only just read this one! It’s been on my list of books to read for years and I’ve finally picked up a copy. I’d heard so many wonderful things about it that I knew I had to check it out and I’m so glad I did.

I knew I’d enjoy Speak before I started reading it but the things I’d been told hadn’t quite prepared for the fantastic writing, heartbreaking storyline and memorable characters. I won’t be forgetting Melinda or the excellent portrayed Mr Freeman for a long time.

Speak is the story of timid Melinda Sordino, who had been outcast at high school for calling the police at an out of control summer party. Back then Melinda had friends, she was even quite popular but after the party nobody wants to have anything to do with her. More than that, though, they go out of their way to terrorise and isolate her. Speak is a powerful story that underlines just how difficult a time high school can be when you’re not part of the in crowd.

One of the things I enjoyed most about Speak is that Melinda never once feels sorry for herself, or asks for your sympathy. She’s so resigned to the whole situation that she just finds ways to pass the time and try to forget the terrible situation she’s in. She has nobody to speak to, not even her parents and all she has to fall back on is an art project she pours her emotion into.

The slow reveal of what really happened to Melinda at the party is brilliant and really draws you into the story. Anderson reveals just enough to keep you enticed but doesn’t give the full details away until one, unexpected chapter towards the end of the book. I was so used to what happened to Melinda being a mystery that I was a little shocked when Anderson went ahead and announced it so bluntly. However, looking back on it I think that was a clever move as it had far more dramatic impact that way.

Everybody praises Speak for its excellent characterisation, honest plot and wonderful denouement and, happily, I have now joined the ranks of those who sing its praises. Hurrah.

What I didn’t like: I try to stay far away from spoilers when I know a book is on my TBR list but, with this one, I’m sorry to say the ending was revealed to me before I started reading. This obviously isn’t an issue I had with the book but it was frustrating that I couldn’t read Speak with quite the same excitement as a reader who had no idea of the brilliant ending.

First line: “It is my first morning of high school. I have seven new notebooks, a skirt I hate and a stomach ache.”

Final thoughts: As somebody a little late into the Speak fan club, I’m now a fully fledged member and would recommend it to anybody who enjoys a observing the highs and lows of high school.

Read if you liked: Some Girls Are by Courtney Summers