Courtesy of the fab Angry Robot I have an exciting bit of news for any of you Sci-Fi fans out there! 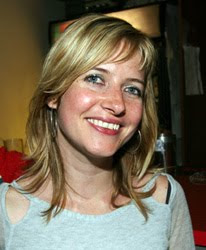 Lauren Beukes (author of the fantastic, critically-acclaimed Moxyland) is making a rare visit to the UK this month from her native South Africa, and I've got details of three events where you can meet her, and get your books signed.

You can order a copy of her latest book, Zoo City, from Forbidden Planet, here. Better still, come along to her signing. There are just 100 copies being sold through Forbidden Planet, so you’re going to have to get one soon to avoid disappointment! This is a very limited limited edition.

Lauren will be signing Zoo City at the London Forbidden Planet Megastore from 6.00-7.00pm on Thursday July 29th. Come along and say “Hi” and pick up a copy of the book.

The reading / interview will be at the upstairs bar of:

The reading will commence around 7.00pm, but people usually start gathering in the downstairs bar from 5.00pm onwards.

British Fantasy Society
Lauren will also be the guest at the first BFS Open Night of the year. Well, not Open Night so much as Open Afternoon. For those of you who might find it hard to get to central London on a weekday evening, Lauren’s BFS event is on Saturday 31st July from 1.00pm until 5.00pm at The George pub on The Strand, WC2R 1AP (nearest tube station: Temple). And again, you don’t have to be a member to attend, though you can join on the day if you wish.

So, those dates again:

Wednesday 28th July: BSFA meeting - 7.00pm onwards (but any time from 5.00 for general chit-chat and beerage)