Hi everybody! So, as you may or may not know, P.C. Cast's brilliant new book The Avenger was released this week (on July 12th), published by Nocturne - Mills and Boon's new paranormal range.

'The Avenger is based around Queen Boudicca and her two daughters - the original 'Dark Daughters' in the House of Night series, so the book ties in neatly. P.C. brings the same warmth and vitality to The Avenger as she does to her HoN series - but with a little added spice!'


I'm almost finished reading my copy of The Avenger and I can tell you first hand it's great - I'm sure any fans of the HoN series will love it and my review will be coming soon so do look out for that. In the mean time, I've got a letter P.C. wrote for her fans about the book and an interview with the writer herself!

'One of the many reasons I enjoyed writing THE AVENGER so much was that the main setting, ancient Briton, 60 AD, was a serendipitous research coincidence. Sounds weird, huh? Well, here’s what happened: At around the same time I was contacted about being involved in the RomVets Time Raiders project I was working on the first of my HOUSE OF NIGHT young adult books.

In the HoN novels there is a school organization called the Dark Daughters, and this group figures predominately in the plot of the series. It’s supposed to be a club led by the best and the brightest of House of Night vampyre fledglings, young women who were being groomed to become High Priestesses of the vampyre goddess, Nyx. So I needed to have a super cool foundation for the group.

I’m of Celtic descent, and have always been fascinated by the history of my ancestors. Because of that I decided to give the Dark Daughters Celtic roots, which meant I needed to research exceptional women in the history of the Celts. That research led me to the Iceni Queen, Boudicca. From the very beginning I was intrigued by her story – that her husband passed the torque of royalty to her at his death, and that she was a well respected leader.

Then a Roman tax collector decided to flex his muscle and show Boudicca who was really in charge of the Iceni. He had her publically whipped and ordered her two young daughters raped. The story intrigued as well as horrified me.

I remember not being able to read fast enough to find out what happened to Boudicca, and cheering as she united the Celts and actually kicked some Roman ass for a while. History reports what happened to the Queen of the Iceni, and I’ll leave that story to my fictionalized, but basically historical accurate rendering in THE AVENGER.

What history isn’t as clear about is what happened to the queen’s two daughters. I decided they disappeared from human history because they were Marked to begin the Change that led them to be powerful vampyre High Priestess, so revered that they began an organization that was to live long after they had passed to their Goddess’s verdant meadows, the Dark Daughters.

And just as I decided that, Lindsay McKenna and Merline Lovelace contacted me with an interesting paranormal romance series idea…where military heroines have to go back in time to retrieve lost pieces of a medallion…to save the world…and out of the historical time period choices I had to send my heroine back to was ancient Briton, 60 AD, and Queen Boudicca.

How could I say anything but yes! Yes! Yes! Hope you enjoy the ride as much as I did.

House of Night fans will find out more about the origin of the Dark Daughters and Boudicca's two girls in The Fledgling Handbook, an illustrated companion to the House of Night, which will be released early fall of 2010.' - So there you have it, straight from the writer's mouth! 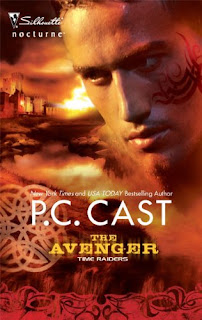 Stay tuned for my interview with P.C. Cast, which will be posted later today! Finally, to watch a fab video of P.C. talking about the book click here.
Posted by CarlyB at 13:47