As I'm sure you're all aware, the fabulous Emma Michaels' first novel, The Thirteenth Chime, is coming out this August (on Friday the 13th - ahhh!). To help promote this fab upcoming release I've interviewed Emma about the book, her writing process and how it felt to hear that her novel was going to be published. 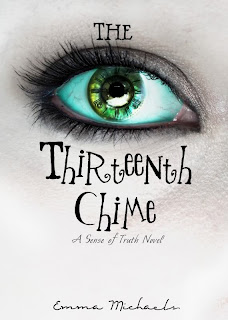 1. In case any readers haven’t read the book yet, can you tell me a little bit about The Thirteenth Chime?

I can't reveal too much as the book won't be officially released until August 13th, 2010, but I can share a bit about it. The story takes place in the state of Washington and follows a series of events that revolves around two people - David and Destiny, who were once involved, but now Destiny is engaged to another man.

After an attack on on her friend's mother and Stephanie, Destiny has to contact David, the one man that she hoped she would never have to call again. He comes to Washington to help her, and they face a literal nightmare of events with only each other for help. It is their bond and the events within the story that I feel is the true story within "The Thirteenth Chime".

Actually, I do both. I set a tentative number of words I aim to write every day, but my main goals I set differently based on the day. I feel it is very important to write every day. Not only does it help me to improve as a writer, but I find the overall process is so much easier and fun.

3. Can you describe how you felt in the moment when you first heard that The Thirteenth Chime had been accepted for publication?

I literally shrieked with glee like a five-year-old *laughs* I had received so many rejections when I submitted queries to agents that I was genuinely surprised at the difference in responses when I began querying publishers directly. The publishers were very optimistic and encouraging. I was ecstatic when the decision was made through Bokheim Publishing.

How 'human' the characters are in the story. The characters are not two dimensional pieces of art placed on a page - they are thinking/feeling people that respond, feel and act just the way real people would act. It is the bond that readers build between character and reader that is most important to get right. I feel that readers will bond well with David and Destiny and really come to like the interaction between the two.
5. The cover art for The Thirteenth Chime is gorgeous – how much of an input did you have with it?

Actually, it was a team effort but when I made the suggestion about the 'eye' and the '13', Bokheim Publishing was excited and really supportive of the idea. They kept me in the loop and gave me the final say on if we would use the final draft of the cover. A lot of people have been wondering if the cover has to do with the story, and yes, I personally think the cover fits the story beautifully.

6. What are the three most important things you need to be able to write?

1 - Something to write with *laughs* 2 - Inspiration 3 - Someone who supports me.

It's impossible to 'write' a story unless you have the right thing to write with, but more than that, getting to write the story brings it to life in a way that I think most people don't realize.

Inspiration is also very important and I don't mean just the inspiration for the story idea. Every page must come with inspiration, otherwise it ends up just becoming filler, where you go from one part to the next.

I also think that someone supporting the writing is necessary because, let's face it - being a writer, whether a novelist, blogger, poet, or scribbler takes a LOT. It truly is a career that takes as much work as going to the office each and every day - I just luck out that my office is located in my home and I can take a break whenever I want.

7. Some writers relate take great inspiration from music while they’re writing. Do you listen to music while you’re writing? If so, what artists/bands do you like to listen to while you write?

I do listen to music sometimes when I write, but usually just during emotional scenes. Music has the potential to call up powerful emotions that I feel are essential for crafting a particular scene with a book in a way that will touch the hearts and minds of readers.
8. Did The Thirteenth Chime always have this title or was that something that came later on?

It was always a tentative title, but I had assumed that when I got published the agent or publisher would possibly want to change it. To my pleasant surprise, not only was Bokheim supportive of the title, they really loved it and said it was perfect for the current market.

9. Can you tell me a bit about your journey with The Thirteenth Chime? When did you first come up with the idea and what were the timescales involved between the first draft and the novel being accepted for publication?

The original inspiration for the clock and prison happened when I first came to Washington State several years ago. I knew I wanted to have two characters, a guy and a girl, with a past history that would make a story filled with powerful emotions. However, it was not until I actually began to write the story itself that it began to flow out of me in a rush.

As to the timescale, as soon as I finished editing my first draft, I began querying agents. I'd spent six months receiving rejections from well over a hundred agents. Then when a good friend pointed out to me that the agents were not looking past the query letter, to even give my actual writing a chance,

I took a big leap and queried publishers who would accept unsolicited manuscripts directly. Within a month, I was receiving really wonderful responses from interested parties. Working with publishers directly has been a learning and very positive experience for me.

Don't give up. Don't you ever give up! There were times I wanted to give up because I kept receiving rejections, but it wasn't based on my writing. If you receive a rejection to your writing, pause, think about it and carefully consider what is being said and implement necessary changes, but then keep going!

Also, don't be upset if your first book isn't the first to get published. I've known some authors who have written five or six books before getting one published, and then the whole line of books they had created before then was published soon after.

I think there is a role that parents and other role models play that has begun to disappear in recent years. Teens are not children - they are beginning to be adults. But they aren't adults yet. So sometimes it is necessary to take a stand and say "perhaps you might not want to read this yet". That said, 'taboo subjects' change from generation to generation.

Fifty years ago, teenagers getting pregnant, for instance, was hidden immediately away from public view. Now, it is discussed in the news almost every day. I think they should have the freedom to make their own decisions, but I also believe that opinions should be given. Luckily with my novels, no one will have to worry about any of that.

I firmly believe that no adult, teacher, or other role model will be able to find anything 'taboo' or wrong in any of my books. I also believe that, although I wrote for a YA crowd, almost any age group can read and enjoy The Thirteenth Chime.
12. Thank you so much for your time, Emma. Before you go, could you tell me about any projects you have in the pipeline we can look out for?
Well, again unfortunately I can't reveal too much at this time, but I can promise that fans will not be disappointed if they like The Thirteenth Chime and didn't want it to end. I also have a series that is due to be released at another date. I can't say much about this either, but I can say that if people like owls and other birds, they are going to really love what is lined up in the future.

Thank you so much to everyone reading and to you Carly for having me here. I hope you all enjoy The Thirteenth Chime!

*I can't wait for this one - can you? To find out more about Emma and The Thirteenth Chime you can visit her blog here*
Posted by CarlyB at 09:00