Hi everybody! Today I have the wonderful Nicola Morgan here at Writing From the Tub to talk about her latest YA book Wasted (you can read my review here) and her career as a writer. Thanks again Nicola! 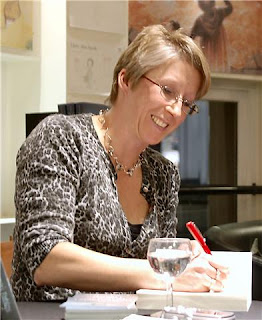 1. In case any readers haven’t read the book yet, can you tell me a little bit about Wasted?

Help! Where to start? It’s about how tiny apparently chance events rule our lives; it’s a love story, a story of danger and passion, in which one boy’s obsession with risk and the philosophy of chance not only has devastating effects on his own life but drags the reader into a spiral of questions about life, the universe and everything.

It’s a story that could freak you out if you let it. Everyone who reads it comments on the very unusual narrative voice and that is a deliberate and crucial part of the story. The reader, like the narrator, is outside looking in, a bit like a god.

There is no average day. It depends what stage I’m at on any piece of work. A redraft can see me at my desk for hours and hours and hours, because I love that stage. The first draft can see me dusting behind the fridge because I find it difficult. Any writing day sees me doing a lot of things that don’t look like writing, because a lot of writing is actually thinking.

Every day also sees me doing emails and so much admin-type stuff to do with being a writer – all the promotion stuff, and arranging events and replying to emails from readers. And answering interview questions! (Which I love, don’t worry – it’s so much easier than writing a book.)

3. In young adult fiction in particular, it’s important that readers bond with the characters - what do you think is the most important thing to get right when you're creating a character?

Everything. Absolutely everything. You cannot get anything wrong at all. Although, as with all writing, you don’t actually write how people speak (because then it would be full of ums and very boring rubbish), you still have to write from a teenage viewpoint, not an adult one, and there simply is no room to get it wrong. Teenagers have no mercy! On the other hand, not everyone will agree whether we get it right - but we have to try.

4. What are your feelings when it comes to fate and chance? Which do you believe in?

If by fate you mean that anything is laid down, destined, oh no, absolutely no. My view is bound up in the mantra of Wasted, that “nothing is until it is and until then anything possible is possible.” But our lives are very bound up in what we call chance.

In fact, I think it’s the tiny, almost unnoticeable decisions that we make, such as leaving the house at this time and not ten seconds later or earlier, that affect our lives, more than the big decisions that we agonise over.

5. What are the three most important things you need to be able to write?

Inspiration, a computer and aloneness. 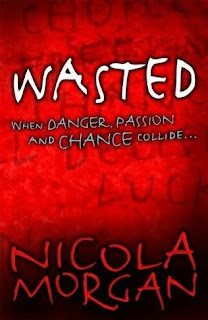 6. Some writers relate take great inspiration from music while they’re writing. With Jess’ singing and Jack’s guitar playing, music is important in Wasted. Do you listen to music while you’re writing? If so, what artists/bands do you like to listen to while you write?

7. Did Wasted always have this title or was that something that came later on?

Always. I can’t really remember thinking about it at all. I had the title from the start.

8. Your villains are always so strong and I think it’s particularly true of Kelly in Wasted. Do you have more fun creating ‘bad’ characters and do you think it’s easier to bring them to life than your ‘good’ characters?

I’d never thought of that, to be honest. In some ways, villains are too easy, and the hard thing is to make them not too awful. I obviously failed with Kelly because she is awful! But don’t you feel a bit sorry for her when she throws up on someone’s garden gnome. No? Ah…

9. What advice would you give to writers who want to make the leap from writing as a hobby to actively pursuing a career in writing?

I think you have to want it so much that it’s hard to imagine ever not wanting it. As a child I didn’t consciously want it, but only because I didn’t know there was such a career. Nowadays, everyone knows there is, and that’s part of what has made it so difficult: because you feel like a failure if you don’t get published but it’s horribly competitive, and not always in a fair way.

I worry about the idea of giving advice about how to move from the hobby to the career – if you feel it’s a hobby I think you should probably keep it that way and carry on enjoying it for that. If you want to make a career of it, you’re going to have to adjust your whole way of thinking. But there are loads of ways of going about it – I’m only saying how it seems to me.

So, my advice is: if you really want it as a career, try to be as open-minded as possible, be greedy for knowledge and try not to become bitter whatever happens. If you haven’t been accepted, it’s because you haven’t yet written a book publishers want. And publishers are not stupid. Well, actually they often are, so second piece of advice is: get used to that.

It’s not exactly a lottery, because it’s less random than that, but there is a huge element of weirdness and unexplained success and failure. If you are going to be too bitter about that, stay out.

10. There is a lot of argument within the young adult market as to what is appropriate for teens to read. Where do you stand on this matter? Do you think teens should be protected from reading about taboo subjects or do you think they should have the freedom to choose their own reads?

11. Thank you so much for your time, Nicola. Before you go, could you tell me about any projects you have in the pipeline we can look out for?

I’m in the middle of four books at the moment: adult non-fiction (Write To Be Published – to be published by Snowbooks next year); gothic fantasy for 9-11s – possibly a series, or trilogy or just a one-off – I’m trying to write it so it could work any way; gritty realism for 9-11; I've just started an adult novel, but that has to come second to my other stuff. I'm just experimenting with that really.

None of those last three have contracts because my agent and I haven’t offered them to publishers yet, largely because I haven’t finished writing them! But I am enjoying them all. Then there’s a gritty YA novel, very gritty, which I’ve shelved temporarily, because four is enough, I think…

THANKS!! Really kind of you to host me on your lovely blog.