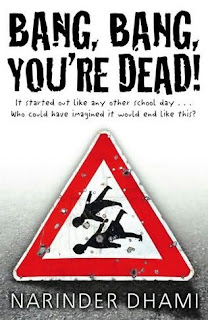 Acquired: Sent for review by Chicklish (Original post can be viewed here)

Summary (from Amazon): It seems like just another day at school - then Mia's world turns upside down. School is being evacuated. Rumour has it there's a gunman in the building. And Mia has a horrible feeling she knows who it is.

Her brother has been acting strangely. He's been threatening to do something drastic, something frightening, something that cannot be ignored...but just how far will he go? Mia is determined to find out, but playing cat and mouse with a potential killer is a very dangerous game.

My review: I’m going to be honest, I started reading Bang, Bang, You’re Dead! feeling very unsure as to whether I would enjoy it or not. The blurb on the back made the story sound more suitable for young teens and I really didn’t think it was going to be my cup of tea.
However, as usual, I was wrong - this novel deals with intense adult issues and emotions and is excellently written. School shootings are a sensitive issue and are rarely written about, particularly in the UK, so it was nice to read about something I hadn’t before.

While the book might start off relatively simplistic, it is anything but and the twist at the end is something I never saw coming. In fact, it was so shocking that I reread the book as soon as I’d finished. That’s another good thing about Bang, Bang, You’re Dead! It’s complex enough that it can be reread again and again and you’ll discover new things each time. That’s something I love in a book.

Dhami presents us with extremely well-developed characters in this novel; Mia, Jamie and their mother. Mia is the shy and retiring sister who feels as though she lives in Jamie’s shadow and we get a great insight into her personality as the book is written from her point of view. This was a particularly clever move from Dhami, especially as the story draws to a close and the twist is revealed.

The rumour of a gunman in the school is a huge event in the novel and is obviously terrifying to read about but there is so much more to the story. In fact, I found the gunman story taking a backseat to Jamie and Mia’s flashbacks about their home life, which were much more intriguing.

Bang, Bang, You’re Dead! is a little shorter than a lot of Young Adult novels and, to be honest, it felt that way when I was reading it. I finished the book in one sitting and the ending did feel a bit rushed. The twist is such a shocking revelation that I think more than one chapter was needed to explore it.

On the back of the book it states that Bang, Bang, You’re Dead! fits into the general ‘teen’ category but I do think it’s more suited to younger teens. Yes, the subject matter is serious and quite adult but the length and language of the book lean more towards younger readers. But then again, I’m an adult and I enjoyed it so there you go.

Dhami is a smart writer. She knows her characters inside out and has obviously done her research for this novel. I hadn’t read anything else by her before Bang, Bang, You’re Dead! but I’ll definitely keep an eye out for her other books now.