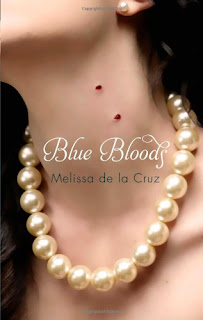 Summary (from Goodreads): Schuyler Van Alen is a sophomore at a prestigious private school. Suddenly, when she turns fifteen, there is a visible mosaic of blue veins on her arm. She starts to crave raw food and she is having flashbacks to ancient times. Then a girl from her school is found dead... drained of all her blood. Schuyler doesn't know what to think.


Could those vampire legends really be true? Steeped in vampire lore and set against the heady backdrop of the rich, young, and powerful in the heart of New York City, Blue Bloods will be devoured by Melissa de la Cruz's legion fans.

What I liked: I’ve always been a fan of Melissa de la Cruz so I was excited to read the first instalment of the Blue Bloods series. I’ve read a lot of positive reviews about each book in the series and, even though I’m not the hugest vampire fan in the world, I was hoping for something great. I’m pleased to tell you that I did get something great.

While I said before I’m not the hugest fan of vampires, what I really mean is I’m not the hugest fan of Twilight. I’m more of an Anne Rice/Vampire Diaries vampire fan. Oh, and Angel, obviously. I like my vampire stories to have blood, sex, drugs and alcohol. I like them to be edgy and thrilling. I like a bit of a love story, of course, but I don’t want the book to be dominated by love. Or romance, more to the point. For me, vampires should be driven by sex, rather than romance. It’s just a personal preference.

Blue Bloods is entertaining from start to finish. Schuyler is a great narrator (but, seriously, is it pronounced like Skyler? Or like SHOE-ler? Am I the only person that was puzzled by this? Is it an English thing? Are there loads of Americans walking around called Schuyler that I’ve never been aware of?). She’s sassy, she’s a little bit different without being annoyingly quirky and she’s not a pushover. Fab.

One of the main things I enjoyed about Blue Bloods is that these vampires aren’t your standard vamps. They live in cycles, meaning they can come back in another form every hundred years (or so... I think), they can eat as much as they want without gaining weight (always entertaining in a YA novel), more importantly – they can drink as much as they want without feeling the effects.

All in all, Blue Bloods is perfect for vampire fans who like the novels with a bit of bite. I’m excited about the rest of the series – which I really need to catch up with before I read a spoiler somewhere! Finally, I wouldn’t be at all surprised if we see a TV adaptation of the series in a year or so.

What I didn’t like: While I’m a big fan of Blue Bloods I wasn’t so keen on the history of the vampires who came across to America on the Mayflower. I’m sure a lot of readers loved the subplot but I found myself skipping through the diary entries and skim reading references to it. It was interesting at first but once the pace of the main plot really got going, that was my main interest, rather than the slower paced history of the vampires.

First line: “One hundred and two people arrived on the Mayflower in November of 1620, but less than half lived to see the establishment of the Plymouth Colony the next year.”