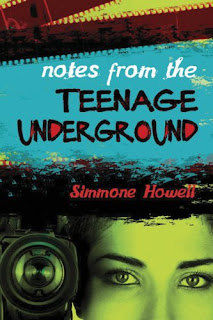 Summary (from Goodreads): Gem is initially thrilled when she convinces her two friends to take their antisocial edge one step further and make an underground film. After all, movies are her thing, and this may finally be her opportunity to shine.

But while Gem is mastering the art of the slow pan, and Mira contemplates the casting couch, no one knows what it is that Lo—the most subversive of the three—has planned. In the back of her mind, Gem’s worried. Instead of equalizing the friendship, the movie seems to bring Lo and Mira even closer together, leaving Gem in a very distant corner. Suddenly, three seems a very uneven number, and the hip underground they’ve chosen a dark and lonely place to be.

It will take great films, bad haiku, and a pantheon of inspirational guides—from Andy Warhol to Henry David Thoreau—to help Gem discover the true meaning of friendship, where family fits in, and that when it comes to underground, a little bit of light is all right.

My review: ‘Me, Lo and Mira were like the good things that come in threes: wishes, kings, backup singers.’

What an opening. The first line of this book’s blurb was enough to have me flying through the pages at lightning speed. From the outset I was optimistic about Notes from the Teenage Underground. The premise is great, the narrator instantly likeable, and I can never resist a novel that focuses on teenagers who don’t quite fit in with their peers.

I’m pleased to say that the book doesn’t disappoint. The entire story is well-rounded and developed, coming full circle with a truly satisfying ending that still left me with a few questions to ponder long after I’d finished reading. Lovely stuff.

Gem, Lo and Mira are outsiders, but they clearly wouldn’t have it any other way. The three friends pass their time each summer by dedicating themselves to a pre-decided theme that carves out how they live their lives in the break. The year before the novel is set, it was the gothic Summer of Satan, but it’s time to mature and find something different, edgier, underground.

And so the girls make grand plans for their summer. They’re going to make an underground film, hold hip gatherings at their version of Andy Warhol’s Factory, and be generally cool. At first it seems like a harmless enough idea: have a few parties, write a script, and wear a lot of pop art T-shirts, but things take a dark turn when Lo and Mira decide they’re not quite living the underground life as it should be lived.

According to Lo and Mira, underground isn’t about innocent teenage fun - it’s about drugs, alcohol, promiscuity and general hedonism. This spells trouble for awkward Gem, who feels more and more unsure of her place in the group as the novel progresses. Bad news for Gem, but good news for us readers, who are treated to some brilliantly descriptive passages from Howell detailing Lo and Mira’s boundary-pushing debauchery.

‘At 0200 hours, Cola arched his back and pissed a fountain of yellow into the spa. I zoomed in on Bliss standing by with a look of horror. Pony was comforting her, rubbing Bliss’s shaking shoulders, making noises about the police.

I imagined Allan Kaprow shaking his head. His Happenings were determined, rehearsed productions, we were just trashing the place.’

One of the things that makes Notes from the Teenage Underground such a pleasure to read is Howell’s obvious passion for the underground scene, a passion that obviously existed long before she started work on this novel, and it shows. There are the classic names everybody associates with the underground - Warhol, Thoreau and Sedgwick, to name a few - but lesser-known masters (and mistresses) of the movement are talked about just as frequently and with the same level of respect.

Howell’s prose is punchy and unapologetic. She’ll talk about drugs and sex, and she’s not going to apologize or censor it. Good - that’s just the way it should be in a novel like this. It brings a genuine feel to the story that I really appreciated. However, sometimes she pulls back and treats us to some lovely, delicate little lines that I wish I’d written myself:

‘And then she ambushed me with a hug. She smelled like sleep and sandalwood, and I held on longer than I thought I would.’