Review: So Much to Tell You - John Marsden 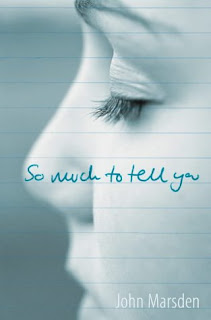 Acquired: Borrowed from the library (Trowbridge)

Summary (from Goodreads): Scarred, literally, by her past, Marina has withdrawn into silence. Then, at her new boarding school, she is set the task of writing a diary by her English teacher, and finds a way of expressing her thoughts and feelings and of exploring the traumatic events that have caused her distress.

Through Marina's diary we gain an insight into life on her dormitory, and her difficult relationship with her father, who injured her in an angry moment.

What I liked: I think the thing that impressed me most about So Much to Tell You is the fact it was written 22 years ago but, as far as I was concerned, it could have been released this year. It really is timeless. Of course there are no references to Facebook or mobile phones but it doesn’t matter.

Marina, our heroine, was scarred in a terrible accident that caused her to stop speaking. It’s been so long since she spoke that she doesn’t even know if she can any more. After spending time in a hospital we never learn much about, she is transferred to her new boarding school, where doctors and her mother are hoping she’ll make new friends and start speaking again.

While Marina does eventually start to make friends, speaking is something she doesn’t do. Instead, she writes her thoughts and the words she wishes we could say in a journal given to her by her English teacher. Through the journal we learn about Marina, her past, the girls in her dormitory and how she is coping with her new school.

The writing is simply beautiful and reminded me a lot of The Bell Jar. The prose is very delicate and it’s clear Marsden spent a long time crafting the book. I was particularly impressed that Marsden wrote a female character so well and I didn’t stop for a moment to think that Marina wasn’t realistically portrayed.

What I didn’t like: My main issue with So Much to Tell You is that I felt there were a lot of secondary characters introduced very quickly but with little to differentiate them. There’s a section where Marina speaks about each girl in her dorm and sums them up in a sentence, which is well written but I found myself having to frequently refer back to that page to remember who was who.

First line: ‘I don’t know what I am doing here.’

Final thoughts: A moving story about a girl who, through writing in her diary, learns to move on from her difficult past and forgive those who hurt her.

Labels: John Marsden, Review, So Much to Tell You