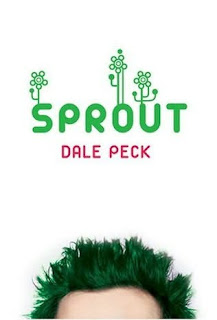 Acquired: Sent for review by Chicklish (Original post can be found here)

Summary (from Goodreads): How many secrets can you hide in plain sight? Sprout Bradford has a secret. It’s not what you think—he’ll tell you he’s gay. He’ll tell you about his dad’s drinking and his mother’s death. The green fingerprints everywhere tell you when he last dyed his hair.

But neither the reader nor Sprout are prepared for what happens when Sprout suddenly finds he’s had a more profound effect on the lives around him than he ever thought possible. Sprout is both hilarious and gripping; a story of one boy at odds with the expected.

My review: Dale Peck’s latest novel is the story of Sprout, a teenage boy trying to deal with the death of his mother, his alcoholic father and his sexuality in a narrow minded Kansas town. Sprout follows the protagonist through his day to day life as he prepares for a state essay contest, copes with the pain of dyeing his hair bright green (hence the nickname), loses his virginity and falls in love for the first time.

Sprout is an interesting novel, not only because it deals with complex issues and leaps from humour to heartbreak in a matter of sentences but because it isn’t a novel that wants to be liked. Sprout is who he is and if you don’t like his voice then he’s wholly unapologetic, you’ll just have to deal with it. That just made me like him all the more, although it wasn’t until I’d read a few chapters that I really warmed to him.

Sprout’s a complex character and, as such, it’s difficult to form a bond with him. He’s extremely intelligent, quick witted and sarcastic but his personality strikes a fine line between funny and derisive and, at times, he’s not very likeable at all.

The story of the novel is different to anything I’ve read before, with the time frame jumping all over the place with no indication but I enjoyed it and it kept me interested. Personally, I felt the story of Sprout was stronger than the characters, although I think Mrs. Miller is fabulous.

Sprout is full of pop culture references, including Facebook, American Idol and Matt Groening. For me this wasn’t a problem at all but I can see this novel becoming very dated in a few years, especially once Facebook gives way to the next social networking site and the bands mentioned have faded into obscurity.

There is a fair amount of sex in Sprout, well, sexual situations to be more precise. The scenes all cut away before anything explicit save for one chapter opening which serves as the best innuendo I have ever read. Watch out for it, it tricked me.

There are numerous questions raised in Sprout, some which are answered during the novel and some which are left for the reader to answer. The ending is abrupt, out of the blue and extremely frustrating; I was ready for at least another fifty pages but it left me gagging for more, which is always a good thing.

I was impressed by Sprout. I’d definitely look at reading some of Peck’s other books and Sprout is not a book I’ll be throwing away any time soon. If you’re looking for a refreshing summer read that’s a little bit quirky then this is the perfect novel for you.