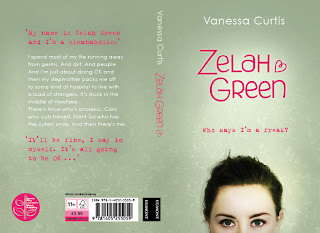 Acquired: Sent for review by Egmont

Summary (from Goodreads): My Name is Zelah Green and I'm a cleanaholic. I spend most of my life running away from germs, dirt, and people. And I'm just about doing ok and then my stepmother packs me off to some kind of hospital to live with a load of strangers. It's stuck in the middle of nowhere.

Great. There's Alice who's anorexic. Caro who cuts herself. Silent Sol who has the cutest smile. And then there's me.

What I liked: Zelah Green is the story of Zelah, a fourteen year old girl who suffers from OCD. After her father disappeared a month before, she’s been living with her stepmother, who doesn’t understand or try to understand her OCD. Zelah is eventually shipped off to a rehabilitation centre for teenagers who suffer from behavioural problems. At first Zelah hates Forest Hill House as the thought of trying to beat her ‘rituals’ terrifies her. Eventually, though, the kind owners of Forest Hill help Zelah to realise that leaving behind her ‘rituals’ might not be so terrifying after all.

Zelah really reminds me of Georgia Nicholson of Angus, Thongs and Full Frontal Snogging (et al). She’s funny, friendly and immediately likeable. She’s a protagonist I’ll remember for a long time, mostly for the frank way she discusses her OCD. She has a softer side too that makes her more relatable, especially when she talks about her recently deceased mother.

The description of Zelah’s therapy at Forest Hill House is extremely vivid and I really felt the tension within the room while she was trying to overcome her OCD. Learning more about the disorder was fascinating and it’s clear Curtis did her research thoroughly before writing the book, which just helps to make it that little bit more realistic and memorable.

What I didn’t like: There are a lot of great support characters in Zelah Green, especially the other residents at Forest Hill House, but I felt like they weren’t explored to their full potential. Alice, in particular, I thought was very underused. Her story was extremely interesting to me and I really wish she’d been given more time within the novel so we could really learn more about her.

Lib, as well, was another one I wanted to know more about. The reason for her stay at Forest Hill House is only implied but I really wanted to hear more about her back story as I thought she was a very intriguing character but she wasn’t really developed to anything beyond a secondary character.

While some serious attention is paid to the problems of the residents at Forest Hill House within the novel, I felt some of the problems were made light of a little often. There were just too many times where Caro’s self harm or Zelah’s OCD were casually joked about – obviously I expected the girls to joke about it between themselves but it did make me feel slightly uncomfortable, which is not a good thing and does take away from the good that the book tries to do.

First line: ‘My name is Zelah Green and I’m a Cleanaholic.’

Read if you liked...: The Boyfriend List – E. Lockhart