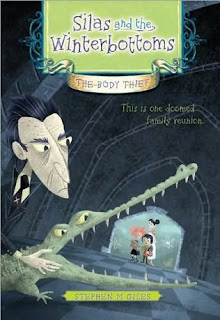 Acquired: Sent for review by Sourcebooks

Summary (from back cover): ‘What secret is Uncle Silas hiding? Adele, Milo and Isabella Winterbottom haven’t heard from Uncle Silas in years – unless you count the occasional insult. So when the cousins receive a mysterious invitation from their disagreeable relative, curious eyebrows are raised. But Silas is dying, and a dying man with a vast fortune usually wishes to find an heir. Or so the children believe. But when they meet dear, old Uncle Silas and his hungry pet crocodile, the trio suspects that he may have a more sinister reason for inviting healthy, young relatives to a secluded island estate, where nothing is as it seems...’

My review: As soon as I discovered, in the opening pages of the book, that Washington, Adele’s bulldog was the victim of an experiment that left him believing he’s a cat, I knew I was in for a treat with The Death and Further Adventures of Silas Winterbottom.

I generally read and review young adult fiction and it’s been a long time since I’ve read a children’s book – I’d almost forgotten how much fun they are to read. Silas Winterbottom is filled with hilarious jokes, a whole host of twists and turns and a very grumpy crocodile called Thorn.

When the three Winterbottom cousins arrive at Silas’ estate they are three very different strangers but by the time the novel comes to a close, they’re lifelong friends, bound together by the increasingly strange events that take place over the course of the novel.

Adele is our heroine here, with snotty Isabella and orphaned Milo acting as supporting characters and each has their own reasons why they are visiting Uncle Silas. Adele has to become Silas’ heir to stop her mother sending her to Ratchet House – the infamous children’s home and Isabella is also after Silas’ fortune. Her and her father are completely out of money so, to supplement their income, Isabella has taken to stealing from her rich friends. Milo just wants to avenge his parents’ murder – the murder that Silas himself is accountable for.

One of the things I love about The Death and Further Adventures of Silas Winterbottom is that each of the three children is written so realistically; they’re not perfect, both Adele and Isabella are guilty of greed and Milo of anger. Instead of children three perfect children, Giles has made them human, which makes it so much easier to relate to them.

Silas is simply brilliant, wickedly funny and a true villain, right to the end. He’s what makes this book such a fun read and I’d definitely recommend this book that anybody in search of a light hearted adventure story.

There’s a great epilogue at the end of the book that hints that there’s much more in store for Adele, Isabella and Milo and I for one can’t wait for the next installment, which I’m hoping is out soon.

First line: ‘Washington, a stocky black bulldog, was licking at the saucer of milk and purring softly when Mr. Walter Fester entered the kitchen muttering to himself about the outrageous price of eggs.’

Read if you liked...: A Series of Unfortunate Events – Lemony Snicket