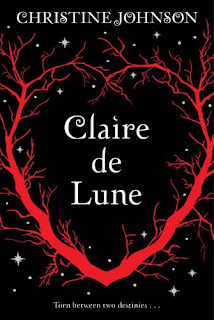 Summary (from Goodreads): Torn between two destinies? Claire is having the perfect sixteenth birthday. Her pool party is a big success, and gorgeous Matthew keeps chatting and flirting with her as if she's the only girl there. But that night, she discovers something that takes away all sense of normalcy: she's a werewolf. As Claire is initiated into the pack of female werewolves, she must deal not only with her changing identity, but also with a rogue werewolf who is putting everyone she knows in danger. Claire's new life threatens her blossoming romance with Matthew, whose father is leading the werewolf hunt. Now burdened with a dark secret and pushing the boundaries of forbidden love, Claire is struggling to feel comfortable in either skin. With her lupine loyalty at odds with her human heart, she will make a choice that will change her forever?

As Claire and Matt’s relationship becomes more intense, so does Claire’s bond with the pack of werewolves she has recently become inducted into. Matt’s father is a scientist in charge of the hunt for the town’s werewolves and, as more humans wind up dead, the search is on and Claire and the other wolves are in increasing danger.

By the end of the novel I did like Claire, though I wasn’t sure of her at the beginning. She seemed a little self pitying after first finding out she was a werewolf, understandable I suppose but I don’t want to read over and over again that she can’t be bothered to listen to her friend’s problems because hers are bigger. Get over it, seriously. However, she does redeem herself as the novel progresses and finds a little bit of sass that makes her much more likeable.

My main issue with the book, however, is Matt. He’s introduced to us as one of those ‘too perfect to be true’ guys, one of those guys who’s so idealistic he has to have a flaw. Matt’s flaw, I realised, is that he’s actually a little bit dull. Very nice, very pretty but a tad boring, which is a shame as I’d have liked to find out more about how he feels about dating a werewolf, especially as his father considers them the enemy. I think it could have been a nice touch to have a couple of chapters written from Matt’s point of view. Oh well. Perhaps in the sequel, which is coming in 2011.

First line: ‘She killed him in the darkest part of the night, before the dew had settled on the grass.’