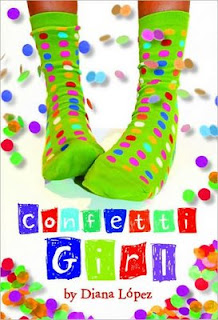 Summary (from Goodreads): Apolonia "Lina" Flores is a sock enthusiast, a volleyball player, a science lover, and a girl who's just looking for answers. Even though her house is crammed full of books (her dad's a bibliophile), she's having trouble figuring out some very big questions.

Like why her dad seems to care about books more than her, why her best friend's divorced mom is obsessed with making cascarones (hollowed eggshells filled with colorful confetti), and, most of all, why her mom died last year. Like colors in a cascarone, Lina's life is a rainbow of people, interests, and unexpected changes.

What I liked: I’ll be honest, the thing that initially attracted me to Confetti Girl was the front cover. It’s just so bright and cheery – I couldn’t resist! I hoped to find a light-hearted summery read inside that would leave me feeling happy and content with the world. Yay, that is what I found!

Lina is a sweet, likeable girl who, along with her best friend Vanessa, is trying to get through her teenage years without failing too many classes, having too many arguments with her book-obsessed father or embarrassing herself too much in front of the boy she likes. She’s also learning what it means to grow up and fall in love and, as Lina says herself, ‘real hearts are reddish purple -- like bruises. No wonder it hurts to love’.

Speaking of love, both of the girls learn a lot about love from their parents, the fantastic Mr. Flores and Mrs. Cantu. Lina’s father, Mr. Flores, is still mourning the death of his wife and turns to his stacked bookshelves to hide his grief. Meanwhile, Vanessa’s mother, Mrs. Cantu, is taking out her anger at her husband’s leaving her on every man she comes into contact with, much to Vanessa’s horror and embarrassment.

Confetti Girl deals with a lot of common teenage issues so I think it’s the perfect read for younger teens who are going through their own problems with oppressive parents, school work and unrequited crushes.

However, I think the most interesting issue our protagonist has to deal with is Vanessa choosing to spend all of her free time with her new boyfriend, leaving Lina feeling like a third wheel. Lopez writes these scenes particularly well and I really felt for Lina when she expressed feeling like ‘a sitcom that’s been cancelled for a snazzier show’.

What I didn’t like: While I did enjoy Confetti Girl, it isn’t a particularly memorable novel and there’s nothing that pushes it over the edge to become a great story. Everything about the story is good but that’s where it ends. I found myself putting the book down for weeks at a time and I didn’t think about it in between sittings.

Final thoughts: Confetti Girl is a harmless novel that is enjoyable but if you’re looking for something that will stick with you long after reading, you won’t necessary find it in this story.

First line: “Some people collect coins or stamps, but I collect socks.”