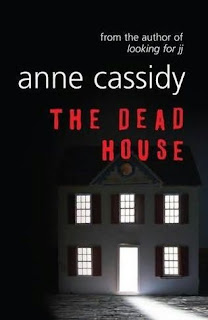 Acquired: Sent for review by Chicklish (original post can be found here)

Summary (from Goodreads): Lauren and her aunt and uncle are returning to London after years living away in Cornwall. For Lauren it is a return to the sight of a terrible family tragedy and a house full of ghosts. When she was six years old her mum and little sister were murdered in their home...and Lauren's dad was put in prison for the crime.

Now she is living a stones's throw from her old house, and despite her trepidation, Lauren is curious to know who lives there now, and how the house will make her feel. When she becomes friendly with Nathan, the son of the new owners, she finds herself back at the scene of so many nightmares...of memories, but also of things forgotten.

Lauren blocked out a lot of that fateful day, but now that she'd older, things are coming back to her...things that could mean her dad is innocent, not guilty of murder. After all these years of hating him Lauren now faces the prospect of loving her dad once again. But is it that easy?

My review: Why do men kill their families? That’s the question Anne Cassidy is trying to answer in her latest novel, The Dead House. Ten years ago Lauren’s father was imprisoned for the brutal murder of her mother and baby sister, she was the sole survivor and provided the statement that put him away for life.

For the last ten years Lauren had been living in Cornwall with her aunt but the opening of the novel sees her return to London and come face to face with her childhood home and all the memories it contains. As Lauren spends time in the house, after she befriends one of the new tenants, she remembers things from her past and uncovers a truth that could change everything she thought she knew.

I found the whole premise of The Dead House very intriguing and Cassidy deals with harsh issues with a frankness and honesty that I really appreciated. Her language is simple, which worked well as it was easy to read and the prose didn’t distract me from the plot.
We find out about a lot of Lauren’s past through the use of flashbacks and letters, which was done well.

Cassidy held my interest from beginning to end and revealed just enough the keep me involved, without giving away the ending too soon. And the ending was a shock, I’d invented many scenarios that I was sure would be right but, no, they were all wrong.

The only things that I felt let The Dead House down were the characters, as none of them stuck in my mind or were particularly strong. For me to really care about a story, I have to care about the characters. Once the characters are there then I don’t think it matters too much what situation they are in, just as long as they’re entertaining and likeable.

I think with this kind of tragic story it’s crucial to care about the protagonist but I didn’t really care too much about Lauren. Sure, the situation she’s in is terrible but she’s just a bit bland and I think that she came across as too much of a martyr, which stopped me forming much of a bond with her.

That said, I did still enjoy The Dead House, particularly as the book drew to a close and the horrifying twist was revealed. Cassidy set out to answer the question of why men kill their families and, although I’m not totally sure she answered it, she did manage to tell a great story.

More by the author: Looking for JJ, Love Letters and Forget Me Not