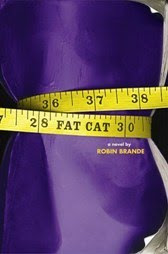 Summary (from Goodreads): Cat is smart, sassy, and funny—but thin, she’s not. Until her class science project. That’s when she winds up doing an experiment—on herself. Before she knows it, Cat is living—and eating—like the hominids, our earliest human ancestors. True, no chips or TV is a bummer and no car is a pain, but healthful eating and walking everywhere do have their benefits.

As the pounds drop off, the guys pile on. All this newfound male attention is enough to drive a girl crazy! If only she weren’t too busy hating Matt McKinney to notice.

My review: In a world dominated by social networking websites, mobile phones and television, can one high school student make it through 207 days without junk food or modern technology? So goes the premise of Robin Brande’s latest novel, Fat Cat.

Cat is your typical lovable heroine. Slightly overweight, hilarious, ambitious and kind, she’s bumbling through life as most teens do, worrying about boys, school projects and her looks. However, her latest science project changes her life forever, when she decides to live like the hominids, the earliest human ancestors. She cuts out television, her car, junk food, caffeine – the lot, all in the name of science.

Cat’s drastic new lifestyle is tough at first but it does have its benefits. The pounds begin to drop off, and Cat no longer hides behind baggy sweaters and jeans. Out come the tank tops and the skirts, and up prick the ears of the male classmates who have never shown an interest in her before.

Of course, there is the one boy Cat can’t (but should) resist: Matt McKinney – her childhood best friend who she hasn’t spoken to in years because of a horrible incident years ago that Cat can barely bring herself to think about. Matt is cool, popular, and her main rival for the school science fair prize, something Cat has her sights set on.

Fat Cat is one of the most enjoyable books I’ve read in a long while. Cat is such a likeable character, and there were moments where I actually laughed out loud. It’s so refreshing to read a book where the heroine isn’t a stick-thin, blonde model type whose only worry in life is boys.

However, Fat Cat wouldn’t be quite so great if boys weren’t present at all, as Cat’s relationship with Matt fascinated me from the beginning. What exactly did he do to make her hate him so much? When I finally found out, I put the book down with a sharp intake of breath: How dare he!

As Cat explores hominid-friendly recipes, my mouth began to water, and as the story progressed I became more and more interested in Cat’s new lifestyle. Aside from being a great tale of high school relationships, Fat Cat is a thoroughly interesting take on teenage body image.

Brande herself actually lived the hominid lifestyle as she wrote the book and it really shows. Her passion is clear, and I don’t think Fat Cat would have been such a brilliant book without all the research and care Brande put into the story.

All women (but particularly teenagers) can find something to relate to in Cat’s story. We’ve all felt bad about ourselves, our looks, our weight at some point. We could all benefit from a little bit of Cat’s attitude and determination... and maybe a few of her hominid recipes.