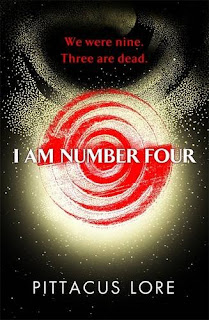 Acquired: Sent for review by HarperCollins

Summary (from Goodreads): Nine of us came here. We look like you. We talk like you. We live among you. But we are not you. We can do things you dream of doing. We have powers you dream of having. We are stronger and faster than anything you have ever seen. We are the superheroes you worship in movies and comic books—but we are real.

Our plan was to grow, and train, and become strong, and become one, and fight them. But they found us and started hunting us first. Now all of us are running. Spending our lives in shadows, in places where no one would look, blending in. we have lived among you without you knowing.

They caught Number One in Malaysia.
Number Two in England.
And Number Three in Kenya.
They killed them all.

I am Number Four.

My review: I would definitely say that I Am Number Four is one of the most eagerly anticipated books of the year. There has been so much buzz surrounding this one, it recently won the ‘Amazon Best Books of the Month’ award for August and the movie adaptation already has a release date of 2011. Not bad for a book that was only released two weeks ago.

I Am Number Four is absolutely absorbing. It’s definitely not the sort of book I would ordinarily pick up but everything about this one drew me in – the title, the cover, the premise. Everything about this book screams modern classic in the making. It’s a big book, weighing in at over four hundred pages but I read it in a single sitting, barely able to put it down for even a moment.

The more I learned about Number Four (who has to change his name every time he and his guardian, Henri, skip town and move on to another destination) and his race, the Loriens, the more I was consumed by the story. It’s written in wonderfully simple prose that doesn’t cloud the complex storyline and each new character we’re introduced to is as brilliant as the last.

Bernie Kosar, the dog, is definitely my favourite character. He’s just brilliant – definitely a Resident Evil 4 style companion and I want to learn much more about him in the next installment of the story. I Am Number Four finishes in the perfect place. Enough loose ends are tied up that I wasn’t throwing the book across the room in frustration but I still had many questions that will keep me guessing until the next book comes out – which is soon, I hope.

I Am Number Four has a little bit of everything I need to keep me entertained throughout a book – we have plenty of action (the fight scenes are awesome), a bit of a love story (how great is Sarah, really?), humour all the way through (Henri’s ‘shit long wait’ made me laugh out loud) and a fantastic conclusion that is still imprinted on my mind, nearly a week after finishing the book.

I Am Number Four is such a diverse story as well. I imagine boys, girls, younger readers and adults will all love this one and I think it definitely has crossover appeal. It’s extremely visual as well so I’m sure the film adaptation will be brilliant.

I’m really excited this book and I can’t wait to hear what everybody else thought about it so if you’d read it already – do send me the link to your review. I hope you all enjoy/enjoyed it as much as I did.

Read if you liked...: The Knife of Never Letting Go – Patrick Ness