Review: I Kissed a Zombie and I Liked It - Adam Selzer 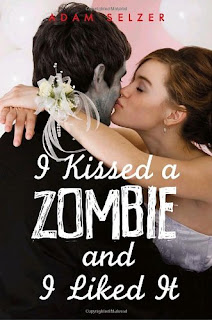 Summary (from Goodreads): Algonquin “Alley” Rhodes, the high school newspaper’s music critic, meets an intriguing singer, Doug, while reviewing a gig. He’s a weird-looking guy—goth, but he seems sincere about it, like maybe he was into it back before it was cool. She introduces herself after the set, asking if he lives in Cornersville, and he replies, in his slow, quiet murmur, “Well, I don’t really live there, exactly. . .”

When Alley and Doug start dating, Alley is falling so hard she doesn’t notice a few odd signs: he never changes clothes, his head is a funny shape, and he says practically nothing out loud. Finally Marie, the school paper’s fashion editor, points out the obvious: Doug isn’t just a really sincere goth. He’s a zombie. Horrified that her feelings could have allowed her to overlook such a flaw, Alley breaks up with Doug, but learns that zombies are awfully hard to get rid of—at the same time she learns that vampires, a group as tightly-knit as the mafia, don’t think much of music critics who make fun of vampires in reviews. . .

What I liked: The main praise I have for I Kissed a Zombie... is that it’s such a nice change to read a book that includes werewolves, vampires and zombies but isn’t an epic tale of forbidden love that, while entertaining, is a complete drain on my emotions. Instead, what I found here was a fun, light hearted read about a high school girl falling in love for the first time...it just happens to be with a zombie. Oh and half of her classmates are werewolves and vampires, naturally.

The explanation of how the supernatural population (or post humans, as they’re referred to in the book, which I love) came into the public view is well thought out and didn’t feel forced at all. At no point did I feel like Selzer was grasping at straws to try and make the paranormal elements fit in alongside the regular young adult storyline.

Alley is just great. She’s edgy enough that I won’t forget her in a hurry but she’s not so ‘quirky’ that she began to grate on me – as ‘quirky’ heroines so often do. No, instead she’s somebody I’d happily be friends with and I really enjoyed the fact she was a music reviewer – yay for reviewing.

The vampires are another great thing about I Kissed a Zombie... the fact they all seem to have thick, stereotypical Eastern European accents made me laugh and I love how bitter Will was about Alley hating his band – apparently these days the worst thing you can do to a vampire is tell him his drum solo was weak.

Reading this book just made me realise how serious and intense the majority of paranormal young adult novels are at the moment and it was nice to read something a little less severe. I Kissed a Zombie is up to date with its inclusion of vampires, werewolves and zombies but there are also frequent references to music, literature and pop culture and are sure to please any young adult fan.

The humour here is great. I laughed out loud on several occasions and the sarcasm pouring forth from Alley and her friends was brilliant but scathing, to say the least. I loved that whenever a funny one liner came to Alley, she purposely saved it to share with her friends at an opportune moment, thus rendering her a comedy genuine – I should really start doing that.

What I didn’t like: I Kissed a Zombie... is a little short at 177 pages and I did feel at times like the plot was rushed, especially towards the end. It felt like our characters were dancing away, happy happy and then all of a sudden the novel was plunged into a dramatic face off between our post humans and everything got a bit dark without much explanation.

I did have to reread the penultimate chapter a couple of times to make sure I hadn’t missed any details so I think an extra chapter or two to explain the simmering rivalry between the zombies and vampires may have made the story just a little bit stronger.

First line: “Watching a vampire make out with an idiot is kind of like going to the farmers’ market and noticing just how many farmers have lost fingers in on-the-job accidents.”

Read if you liked...: The Radleys – Matt Haig

Labels: Adam Selzer, I Kissed a Zombie and I Liked It, Review