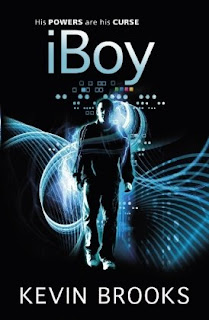 Acquired: Sent for review by Penguin

Summary (from Goodreads): Before the attack, sixteen-year-old Tom Harvey was just an ordinary boy. But now fragments of a shattered iPhone are embedded in his brain and it's having an extraordinary effect...Because now Tom has powers - the ability to know and see more than he could ever imagine.

And with incredible power comes knowledge - and a choice. Seek revenge on the violent gangs that rule his estate and assaulted his friend Lucy, or keep quiet? Tom has control when everything else is out of control. But it's a dangerous price to pay. And the consequences are terrifying.

What I liked: I must admit, when I first read about iBoy and learned it was the story of a teenage boy who was hit on the head by an iPhone and then acquired powers I was somewhat sceptical. However, something intrigued me about the book and I’ve heard so many wonderful things about Kevin Brooks that I really wanted to give it a try.

iBoy is a brilliant story. It’s a simple as that. Sure, the premise might sound a little strange to those of us who prefer our novels a little fluffier but it makes for excellent reading and I genuinely couldn’t put it down until I’d finished.

Okay,I’ll admit that being smacked on the head with an iPhone and then acquiring its powers is slightly far-fetched but the way Brooks explains the transformation really does make sense. I found it so easy to suspend my disbelief and the quotations and technical extracts at the beginning of each chapter were really fascinating.

I’ve found more often than not that books set on inner city estates are not my kind of thing – I’ve found too often that the protagonists glorify gang warfare and spend too much time complaining that they weren’t born into rich families. However, iBoy is set on such an estate but the setting was fantastic, there wasn’t an ounce of self pity and I really felt like I was there in Tom and Lucy’s world.

The gang members in iBoy are absolutely terrifying and extremely well-written; I always think the writing in a novel must be great if I really hate the villains and iBoy definitely fell into this category. Ellman was absolutely vile and I was willing Tom on to defeat him the whole time. Brilliant stuff, absolutely gripping.

iBoy does talk in depth about gangs and there is reference to sex, drugs and violence so this one isn’t suitable for younger teens. However, if you enjoy a thrilling story that is different to anything you’ve read before, definitely make time to read iBoy.

What I didn’t like: My only real quibble about iBoy is the overuse of the whole ‘i’ gimmick. Iboy – fair enough. Iphone – of course that’s going to be included. However, after reading about Tom’s iBrain, iSearch and iPowers I just wanted it to stop. Apple are truly taking over the world.

First line: “The mobile phone that shattered my skull was a 32GB iPhone 3GS.”

Read if you liked...: When I Was Joe – Keren David