Review: It Happened to Nancy - Anonymous 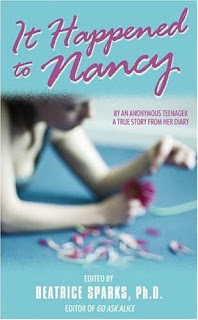 Summary (from Goodreads): Diary entries of an anonymous 14-year-old girl who was date raped, became infected with the HIV virus and subsequently died.

What I liked: It Happened to Nancy is not a light read, nor is it one that I enjoyed per se. I enjoyed the quality of the writing in parts and I enjoyed Nancy’s development throughout the novel. What I didn’t enjoy was reading about a fourteen year old being raped and subsequently dying of AIDs. It’s just not a very enjoyable experience.

Nancy is a likeable girl, which makes it harder for us to read about what happens to her. The book is very educational when it comes to HIV and AIDs and I think it was right that the book was supplied to school children when it was released. As I said before, it’s not a pleasant read but I think it’s a necessary one.

What I didn’t like: Well, It Happened to Nancy is marketed as the true diary entries of a fourteen year old girl who died from AIDs, along with Go Ask Alice and a number of other books that deal with teen issues. The main problem I had with this book (and the other similar titles) is that I find it hard to believe that it was genuinely based on somebody’s diary.
The language, the sentence structure, the character development, it all just seemed too forced, too choreographed and too planned to really be somebody’s journal.

There are just too many times where Nancy talks about how she loves God and her family ‘soooooooo’ much and is ‘soooooooo’ sorry she ended up in this mess (yes, there are that many o’s). I just felt like there were so many points where it felt like an adult sat down and thought about what would make the writing sound like a young teen. Note: Bad spelling and grammar is not the way to go.

I’m not doubting that the book is well written and an interesting story but it just seemed a little unsettling that it was portrayed as a real person’s diary when, in my opinion, it quite clearly wasn’t. I’m sure the publishing house marketed it as a real diary to generate some buzz and increase publicity but I think the book would have done just as well if it had been released as a work of fiction.

Final thoughts: This one could have been great but there were too many occasions where I stopped to consider the believability of the story, which took away from the flow of the novel.