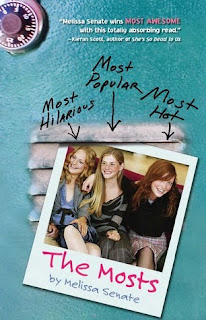 Maddie's part of the in crowd . . . the Mosts. Her best friend, Caro? Most Beautiful. Her other friends, Fergie, Annie, and Selena? Most Stylish, Most Hilarious, and Most Hot, respectively. And Madeline? Most Popular. Her life is great.

Now Thom's moved to California-so Maddie's no longer the girlfriend of a popular guy. The guy Caro likes only has eyes for Madeline-can you say social suicide? And a group of misfits at school are begging Madeline to help make them over.

Madeline knows there's a fine line between being a Most . . . and being a Not. She doesn't want her status to change . . . but what if she doesn't have a choice?

What I liked: The Mosts is the story of Freeport Academy’s ‘Most Popular’ girl, Madeline. She came from obscurity to claim the title and is now part of Freeport’s most competitive clique – The Mosts. However, she comes to realise that staying in is just as hard as getting in (I totally stole that from The Clique books, I know, I’m sorry) and, as the story progresses, she isn’t completely sure that staying in is what’s most important to her any more.

After her gorgeous boyfriend Thom moves across the country to California, Madeline is distraught. She’s worried that their relationship won’t last and she’s scared that, with Thom gone, her popularity will begin to wane, as it was their relationship that helped her gain her status in the first place.

Her only shot of saving her relationship with Thom is raising the $300 she needs to fly out to California to visit him. Enter The Nots – the loser kids of Freeport Academy. Three interns at Madeline’s farm offer to pay her $400 to tutor them in how to be popular, stylish and attractive to the opposite sex. A brilliant business opportunity or social suicide? Madeline isn’t sure but she knows one thing: she needs that money for her ticket to California.

From here on out Madeline’s popularity takes a steep downturn as her friends slowly distance themselves from her and her relationship with Thom breaks down. To make matters worse, the only guy she’s interested in besides Thom is the guy her best friend (and Most Beautiful) is after. She knows that making a move will ruin her friendship with Caro and secure her expulsion from The Mosts but is she willing to give all that up for the guy she likes?

Once of the things I enjoyed most about The Mosts is Madeline’s character. She’s not your average popular girl, which was a refreshing change. She’s not even sure why she was voted Most Popular in the first place and she has all the worries about teenage life that we’re all been through – or are going through. I’m so used to picking up teen or young adult novels where the protagonist is a filthy rich, blonde, socialite with no cares in the world so it was nice to read a high school story that wasn’t driven by money and glamorous parties.

What I didn’t like: The main problem I had with The Mosts was the secondary supporting characters who made up the other popular girls and guys at Freeport Academy. It seemed like so many girls were introduced at once without much distinction between them that I found it hard to remember who was who.

Sure, we were told who was ‘Most Hot’ and ‘Most Stylish’ and given a physical description of each girl but 100 pages later I had no idea whether Fergie was ‘Most Hilarious’ or ‘Most Stylish’. Their dialogue wasn’t particularly varied so, to be honest, when characters others than Caro and Madeline were talking I couldn’t tell who it was so the background girls just ended up blurring into one big popular secondary character. This was a bit of a shame really, as the rest of the writing is great.

First line: “For two weeks, I asked everyone I met if they thought long-distance relationships worked.”

Read if you liked...: The Clique – Lisi Harrison