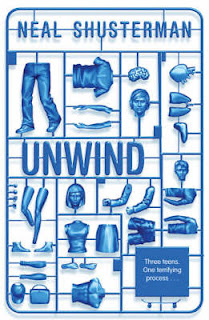 Summary (from Goodreads): ‘In a society where unwanted teens are salvaged for their body parts, three runaways fight the system that would "unwind" them.

Connor's parents want to be rid of him because he's a troublemaker. Risa has no parents and is being unwound to cut orphanage costs. Lev's unwinding has been planned since his birth, as part of his family's strict religion.

Brought together by chance, and kept together by desperation, these three unlikely companions make a harrowing cross-country journey, knowing their lives hang in the balance. If they can survive until their eighteenth birthday, they can't be harmed -- but when every piece of them, from their hands to their hearts, are wanted by a world gone mad, eighteen seems far, far away.’

My review: Unwind is one of those books that I gave in and bought a copy of, simply because I was sick of people constantly telling me I had to read it. Initially, I didn’t think the book sounded like my kind of thing but when I had a look online, I found numerous reviews talking about a certain scene that was so disturbing they couldn’t get it out of their heads. People were even saying the book was disgusting and too controversial for young readers, despite it being on the reading list in many schools. Ah, maybe I would enjoy it then.

In short, the process of unwinding is defined as follows, ‘unwinding occurs when a person between the ages of 13 and 18 is surgically separated and all body parts are used as transplant parts for others.’ Pretty horrible, huh? Well, Unwind is the story of three runaway unwinds who are trying to stay hidden until their eighteenth birthdays, to escape their hideous fate.

Our protagonists include tough on the outside, soft of the inside Connor – whose parents gave him up because of his constant fighting. He quickly becomes the leader of any situation he’s placed in and develops a soft spot for Risa, who grew up in a state home and was given up for unwinding as they believed she had ‘reached her full potential’.

Then we have Lev, who is a ‘tithe’, also known as a religious sacrifice. At first he is happy that he’s being unwound. As far as he’s concerned that’s his purpose in life and he’s accepted it. However, after he runs away with Connor and Risa, he begins to realise that there is more to life than he first thought and his growing contempt for his parents changes him from an innocent young boy into a rebellious youth, who will stop at nothing to survive.

Unwind is told from all three perspectives and this is a great device. The story stays personal enough that we get to develop a relationship with each protagonist but the great thing about the split narrative is that when the three become split up, we can follow each character on their journey and the story still maintains its personal feel – very nice.

So, I’d heard a lot about this certain scene in Unwind, that is so horrific and disturbing etc etc. Well, it’s really not that bad. The scene is brilliantly written and quite terrifying but I’m not sure it’s bad enough to deserve all the crazy hype. Watch out for it though – it’s near the end, you’ll know when you hit it and I can say first hand it’s definitely best to go in blind so don’t look it up on Wikipedia. Promise?

Unwind is a fantastic novel and it deserves its reputation as a modern classic. It’s thoroughly inventive, brilliantly written and genuinely scary. The scares are psychological here, though, so expect the story to stay with you long after you’ve finished reading.

It definitely got me wondering how I would have survived in a world similar to that in Unwind – I like to think I’d have made it to my eighteen birthday but who knows. Would you?

First line: ‘“There are places you can go,” Ariana tells him, “and a guy as smart as you has a decent chance of surviving to eighteen.”’

Read if you liked...: The Hunger Games – Suzanne Collins