Hi all, I'm here today to talk to you about the exciting new release from Malorie Blackman called Boys Don't Cry. It's out October 28th 2010 and is being published by Random House. At the Book Blogger Brunch Random House invited me to earlier in the year we had a look at all of the cover choices for this one so it's nice to see it coming out soon - I can't wait to receive my copy!

So, without further ado, please see below for the press release for Boys Don't Cry. It sounds brilliant and I'll be posting up my review soon so do look out for that. 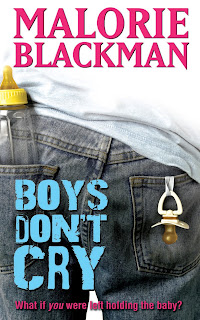 'Boys Don't Cry is the hard-hitting new teenage novel from Malorie Blackman, the acclaimed author of the bestselling Noughts and Crosses sequence. In Boys Don’t Cry, Malorie explores the unchartered territory of teenage fatherhood. You're waiting for the postman - he's bringing your A level results. University, a career as a journalist - a glittering future lies ahead. But when the doorbell rings it's your old girlfriend; and she's carrying a baby. You're fine to look after it, for an hour or two, while she does some shopping. Then she doesn't come back and your future suddenly looks very different. Seventeen year old Dante is left holding the baby. His baby. Not only does he have to come to terms with the fact he is now a father but he is also faced with the realisation that his life is about to dramatically change. He needs to learn how to raise his daughter when he still feels like a child himself. The reader follows Dante as he stumbles against the obstructions and prejudices in society, but also experiences some of the joys that only parenthood can bring. Not one to shy away from controversial subjects, Blackman handles the issue of teenage fatherhood with sensitivity giving a voice to a group largely ignored by society. This subject is highly relevant in today’s society as Britain has the highest teenage pregnancy rate in Western Europe. A recent survey from The Department for Education* found that almost one in five girls who are sexually active at the age of 18 have been pregnant at least once. Of all those who had been pregnant, just under half (46%) had given birth. No statistics were released about teenage fathers. Running alongside the main thread of the story, Blackman tackles the subjects of homosexuality and homophobia. Woven into Dante’s story are insights from his brother Adam who is affected by these issues. Blackman is renowned for exploring minorities in society in her fiction and Boys Don’t Cry is no exception. She highlights themes that can be uncomfortable at times but offers hope and acknowledgement of these subjects.'