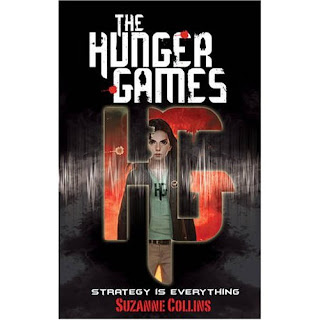 Summary (from Goodreads): In the ruins of a place once known as North America lies the nation of Panem, a shining Capitol surrounded by twelve outlying districts. The Capitol is harsh and cruel and keeps the districts in line by forcing them all to send one boy and one girl between the ages of twelve and eighteen to participate in the annual Hunger Games, a fight to the death on live TV.

Sixteen-year-old Katniss Everdeen, who lives alone with her mother and younger sister, regards it as a death sentence when she steps forward to take her sister's place in the Games. But Katniss has been close to death before—and survival, for her, is second nature. Without really meaning to, she becomes a contender. But if she is to win, she will have to start making choices that will weigh survival against humanity and life against love.

What I liked: Well I’ll be honest right about now – there are two reasons I decided to read The Hunger Games. Firstly, last week Mockingjay was released and I was sick of trying to dodge spoilers that *certain* people were posting all over Twitter. Don’t post spoilers, people. It’s RAGE-MAKING. I decided to try and combat the spoilers by starting to read the series – at least this way I’ll have finished Mockingjay soon so I won’t have to worry about stumbling across something I’d rather have discovered for myself.

Anyway, rant over. The second reason I read The Hunger Games is because I asked my ever helpful boyfriend to pick between The Knife of Never Letting Go (which I really wanted to read) and The Hunger Games (which I had been putting off reading for nearly a year, I’m still not sure why). He said The Hunger Games, I asked numerous times if he was sure. He said yes. I felt obliged.

Although it causes me actual pain to quote Stephanie Meyer as having said anything remotely useful to anybody, I will do so here: The Hunger Games is amazing. Thank you Miss Meyer for your wisdom and insight. Your words are deep and meaningful as always. Sorry – bitching aside, the Twilight authoress had it quite right because The Hunger Games really is amazing (a side note: I’m not sure why I’m bitching so much today, please excuse me).

It seems a little pointless to write a review of this book, seeing as I’m pretty much the last person in the world to read it. Like Shiver, Uglies, Blue Bloods and The Chaos Walking series – I am well and truly a step behind everybody else. But, once again, I’m leaping onto the bandwagon with both feet. So, yes, The Hunger Games is awesome. Instead of actually writing a review detailing the wonders of the sentence structure and pace, I shall proceed to write a list of six things I loved about The Hunger Games (I started off by writing ten but it was getting very long and rambly so I thought shrink it down a bit):

1. The names. I LOVED the names. Generally I bitch and moan if characters are given ‘quirky’ names. I hate ‘quirky’, if you couldn’t tell. But Peeta, Haymitch etc all made me really happy, especially when I realised they were kind of standard names...but kind of not. It was a while before I realised that Peeta is Peter and so forth. Clever. Very clever indeed.

2. Katniss is really great. She will kick your ass if you piss her off. My kind of girl.

3. I loved Rue. Loved, loved, loved her. Such a sweetheart.

4. I like the love rivalry I can tell is brewing between Gale and Peeta. Actually, I guessed this because of all the ‘Team Gale’ ‘Team Peeta’ malarkey that’s ALL over the Internet but, still, I do like a love triangle. For the record, at this moment in time I’m team Gale but that’s definitely subject to change.

5. Haymitch is wonderful. I always enjoy a drunken uncle character and he fits the role beautifully. Lots of alcohol induced vomiting here. Lovely.

6. The actual writing in The Hunger Games is excellent. I was gripped from start to finish and read almost the whole book in a single sitting. When I finished it I almost wept because I didn’t have Catching Fire and Mockingjay to dive right into so promptly relayed the entire storyline to everybody I came into contact with and ordered the next two books sharpish.

At the back of my edition of The Hunger Games there’s a little Q&A with Suzanne Collins where she says that she came up with the idea for the book while channel hopping between a reality TV show where people compete to win money and a war coverage on the news. Okay, that’s plausible I suppose.

However (and please don’t all go mental at me for saying this), has nobody else cottoned on to the fact that The Hunger Games is almost identical in every single way to Battle Royale? Literally, almost identical. From the landmines to the arena to the characters to the love story to the weapons and the games being run once a year in a future world where civilisation has collapsed/is collapsing.

There are so many details I could list here that are exactly the same. If it’s all by chance then it’s one hell of a coincidence. Now, I have absolutely no problem with The Hunger Games being so similar to Battle Royale because there are some differences and the book is fantastic, it's just something I wanted to mention.

Yes, I love The Hunger Games. It’s fab. Read it – if you’re just as behind the times as me and haven’t actually gotten around to it yet.

First line: ‘When I wake up, the other side of the bed is cold.’

Read if you liked...: Battle Royale (film – I haven’t read the graphic novel so I won’t recommend it but I’m sure it’s great)