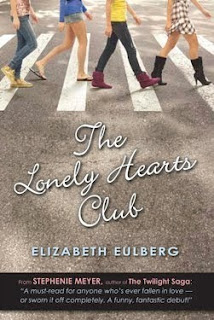 Summary (from Goodreads): Penny is sick of boys and sick of dating. So she vows: no more. It's a personal choice. . .and, of course, soon everyone wants to know about it. And a few other girls are inspired. A movement is born: The Lonely Hearts Club (named after the band from Sgt. Pepper). Penny is suddenly known for her nondating ways . . . which is too bad, because there's this certain boy she can't help but like. . .

My review: Well first I have to say how much I enjoyed the Beatles references in this one – Penny Lane Bloom, Lonely Hearts Club, the Abbey Road inspired cover and many more. Awesome. Who doesn’t love the Beatles? Anyone?

The Lonely Hearts Clubs sees our protagonist, the frustrated Penny Lane Bloom swear off boys and relationships forever. And she means business. As her decision begins to pick up a bit of a buzz other girls join her and suddenly it becomes a movement. Which is great at first but then when Penny finds herself irresistibly attracted to a certain dashing young man, she finds herself in a bit of a situation.

This one is a fun, summery read that will leave you feeling smiley and, unfortunately a little non-plussed upon the story’s conclusion. It’s a great book and really enjoyable but there’s nothing about The Lonely Hearts Club to push it over the edge and make it an unforgettable read. When I compare it to other books I’ve read this year like The Sky is Everywhere and Entangled it just falls a little flat.

That said, though, it is worth a read so I would recommend it but it’s not something that’s going to rock your world and stay with you for days after finishing. Though, if you just want to escape into somebody else’s world for a little while then do pick up a copy – and stick on a Beatles album while you’re reading it for the full effect!

First line: ‘I, Penny Lane Bloom, do solemnly swear that I will never date another boy for as long as I shall live.’