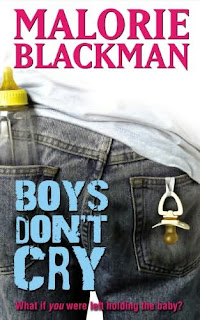 Summary (from Goodreads): This is the explosively page-turning new novel for teenagers from the author of the award-winning "Noughts and Crosses" sequence. You're about to receive your A-level results and then a future of university and journalism awaits. But the day they're due to arrive your old girlfriend Melanie turns up unexpectedly... with a baby...

You assume Melanie's helping a friend, until she nips out to buy some essentials, leaving you literally holding the baby... Malorie's dramatic new novel will keep you on the edge of your seat right to the final page.

My review: Well I have to be honest right now and confess that Boys Don’t Cry is the first Malorie Blackman novel I’ve ever read. I know – scandalous. I’ve heard nothing but amazing things about her books and, on Tinie Tempah's recommendation I’m now definitely a member of the fan club. Boys Don’t Cry is an absolutely fantastic story about love, growing up and accepting who you are.

I think it’s one of the most incredibly diverse novels I’ve read for a very long time. My case in point – after I finished the book I passed it on to my eighty year old grandmother. She reappeared two hours later and couldn’t stop talking about how much she loved the book. I’d lend this to my boyfriend, my best friend and anybody who’s ever been unsure of themselves. Simply brilliant.

It’s impossible not to feel for Dante – he’s left holding the baby, his future dreams of attending university and becoming a journalist seem impossible and it suddenly dawns on him that he is no longer his main priority. He has a baby. A baby who he has to raise on his own. That’s a hard thing for anybody to deal with and the thing I liked most is how realistic Blackman makes the story.

Dante doesn’t fall into the role of doting father overnight and he doesn’t magically wake up and know exactly how to act around Emma. I’m glad he struggles, I’m glad he feels lost and doubts himself because it makes him much more relatable and much more whole as a character.

Adam is a wonderful supporting character and his subplot is a fantastic addition to the story. The drama comes so out of the blue that it really made me sit up and pay attention – brilliant.

The whole novel is so carefully crafted; I don’t feel as though any words were wasted. The language is concise, careful and extremely easy to read so it’s the plot and characters that we focus on. There are funny moments in Boys Don’t Cry, hardships for each character to face and some genuinely heart warming passages that make this one of my favourite books of 2010. Fact.

Read if you liked...: And Baby Makes Two – Dyan Sheldon (though Dante is the complete antithesis of Lana, I have to say)