*Now, I HATE spoilers, I really really do but this review is FULL of them so I’m going to warn you before you even start – do not read this review unless you want to know the ending of Mockingjay and all the details in between! SPOILERS below!* 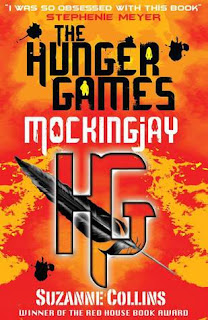 Summary (from Goodreads): Katniss Everdeen, girl on fire, has survived, even though her home has been destroyed. Gale has escaped. Katniss's family is safe. Peeta has been captured by the Capitol. District 13 really does exist. There are rebels. There are new leaders. A revolution is unfolding.

It is by design that Katniss was rescued from the arena in the cruel and haunting Quarter Quell, and it is by design that she has long been part of the revolution without knowing it. District 13 has come out of the shadows and is plotting to overthrow the Capitol. Everyone, it seems, has had a hand in the carefully laid plans -- except Katniss.

The success of the rebellion hinges on Katniss's willingness to be a pawn, to accept responsibility for countless lives, and to change the course of the future of Panem. To do this, she must put aside her feelings of anger and distrust. She must become the rebels' Mockingjay -- no matter what the personal cost.

My review: Well, what a fantastic way to end The Hunger Games series! I’d heard so many mixed reviews about Mockingjay – it seemed to completely divide opinion but, personally, I think it was executed perfectly.

The pace of Mockingjay is completely different from the other two books in the series and, while we’re used to physical pain and drama in The Hunger Games and Catching Fire, Katniss’ torment is much more psychological in this installment, which I think helps to make the book extremely powerful.

Everybody’s favourite characters are back (except Cinna – I believed right until the very end that he’d have been spared and would make a final appearance, sadly not) and although they don’t all make it – I think the deaths are an integral part of the story.

I love the way Collins is so matter of fact about the death and fighting in this book. In the previous two Katniss reacted a lot more to the deaths of her friends and the other tributes. However, in Mockingjay she takes it in her stride. We can see how far she’s come from the young girl stepping in for her sister in the first book. She’s hardened to the blood and gore of war and nothing will stop her reaching her goal – to kill President Snow.

Mockingjay feels like a boiling kettle – it starts off slowly simmering and we learn more about District 13 and the rebels’ plot to overthrow Snow. Then, in part two, the water begins to heat up and we see the training begin, the propos start to roll out and Peeta makes his grand return. Finally, in the relatively short final part, everything boils over in the explosive penultimate chapters and the vast majority of the action takes place within 10-20 pages.

I did feel a bit put out when Katniss woke up in the hospital after the parachutes went off and I realised we weren’t going to hear about the rest of the war – I thought we were in for at least another chapter or two of fighting but it all fell into place quite quickly and I’m glad Collins chose a different direction. It definitely kept me on my toes.

By far my favourite chapters were the last couple – I loved finding out what happened to Katniss and co after the rebellion was over and, although I was a bit gutted about Prim, I have to say the return of Buttercup made me cry my first tears of the book (though I was close to crying when Finnick met his demise). Sad, sad sad.

After Buttercup made me shed a few tears, they didn’t show any signs of stopping and I did weep continually until I’d finished, especially at the last line, which was a true stroke of genius. Although I never really saw the whole ‘love triangle’ element I was pleased Katniss and Peeta ended up together. For me, it was clear from the beginning who she would choose and I never felt as though there was anything other than a brother/sister relationship between her and Gale. Okay, maybe they kissed a couple of times but, as Katniss says herself, it was much more a pity kiss.

So this isn’t a proper review, I know. But as I said with The Hunger Games and Catching Fire, there are so many reviews out there this is more a collection of my thoughts about the story with no real structure. Let me know your thoughts! There’s so much to discuss about this one, I’d love to hear what you all though, especially if you didn’t enjoy it as much as the others.

First line: ‘I stare down at my shoes, watching as a fine layer of ash settles on the worn leather.’