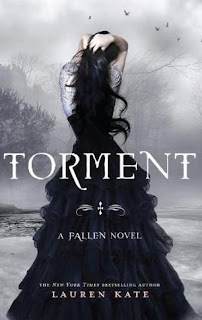 Summary (from Goodreads): How many lives do you need to live before you find someone worth dying for? In the aftermath of what happened at Sword & Cross, Luce has been hidden away by her cursed angelic boyfriend, Daniel, in a new school filled with Nephilim, the offspring of fallen angels and humans. Daniel promises she will be safe here, protected from those who would kill her.

At the school Luce discovers what the Shadows that have followed her all her life mean - and how to manipulate them to see into her other lives. Yet the more Luce learns about herself, the more she realizes that the past is her only key to unlocking her future...and that Daniel hasn't told her everything.

What if his version of the past isn't actually the way things happened...what if Luce was really meant to be with someone else?

What I liked: So firstly I have to just say that the thing I love most about Torment is the stunning cover – yes, yes, story and characters and plot are important and luckily they’re fantastic too but I literally couldn’t stop staring at this cover when I first received an ARC of Torment. Beautiful. I can’t wait to see the cover of the next installment.

Luce and co are back in Torment but this time we’ve moved from Sword & Cross to a new school, where Daniel believes she will be safe from the Shadows that have always followed her. At her new school Luce makes some new Nephilim friends, Nephilim being the children of fallen angel and human parents.

The friends Luce makes really help drive the novel forwards, just as her old friends did in Fallen, Francesca and Miles are my two particular favourites – especially Miles J. Luce comes into her own in Torment, proving that she can be both endearing and funny, as well as being so much stronger than I ever gave her credit for in Fallen.

Lauren Kate is the queen of romantic prose and she’s back and better than ever in Torment – some of her descriptive passages are so beautiful I had to read them over and over again. I’d love to quote some here so I don’t want to spoil anything for those of you who haven’t read it yet.

What I didn’t like: Well, fangirls go ahead and shoot me but I’m still not crazy about Daniel, even after his epic declarations of love throughout Torment. There’s just something that doesn’t sit quite right with me – and I think Luce should be with somebody else. There’s Cam, there’s Miles... I just feel that if she was one of my friends, I’d shake her a little bit and encourage her to look outside the Daniel-shaped box she’s fixated on.

First line: ‘Daniel stared out at the bay.’