*Note: Yes, this is Willow by Julia Hoban. Scarred is just the UK name* 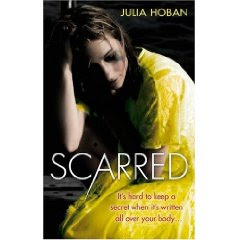 Acquired: Sent for review by Piatkus
Summary (from Goodreads): Seven months ago, on a rainy March night, sixteen year- old Willow’s parents died in a horrible car accident. Willow was driving. Now her older brother barely speaks to her, her new classmates know her as the killer orphan girl, and Willow is blocking the pain by secretly cutting herself. But when one boy—one sensitive, soulful boy—discovers Willow’s secret, it sparks an intense relationship that turns the “safe” world Willow has created for herself upside down.

Told in an extraordinary fresh voice, Willow is an unforgettable novel about one girl’s struggle to cope with tragedy, and one boy’s refusal to give up on her.

My review: Okay, so I’d say the only really negative review I’ve posted up to this date was for Fabulous Terrible by Sophie Talbot (fabulous it was not, I can assure you). I do always feel a little unsure before posting a negative review – I’ve posted in the past and received a whole host of bitchy emails because I haven’t liked somebody’s favourite book. But if I held back on what I really thought in case I hurt someone’s feelings what kind of blogger would I be? Exactly. A bad one. It does put me off when I visit someone’s site and see nothing but 5* reviews. So, even though some people might not like it, I’m always honest about the books I’ve read.

So, let me preface this review by saying I understand 100% the severity of the subject matter in Scarred and it’s probably because I understand it so well that this book made me so angry. By writing a negative review of Scarred I’m not, in any way, making any comments about self harming or anybody who is affected by it. Please, please do not fill up my inbox with angry emails saying that because I didn’t like this book I hate anybody who self harms... Or whose parents have died. I’m well aware that Goodreads is filled to the brim with glowing reviews of this book and most of you absolutely adored this book, so I am sorry for hating on a book you love but this is my opinion.

Right, so, where do I even begin? I actually don’t know where to start. I’m sure you’ve guessed by now that I’m not exactly the biggest fan of Scarred but it would be nice to start the review with something positive. Well, the back cover of my copy states that Scarred is ‘Reminiscent of The Virgin Suicides and Before I Die’. That’s nice, isn’t it? It’s also a total lie and a huge insult to two fantastic books but I’m trying to stay positive, at least for this paragraph.

This is the only book I’ve ever read that I can come right out and say I actually hate. For me it has absolutely no redeeming features, nothing going for it. Honestly, I don’t know how it even made it to publication. Not only are the characters hateful (more on that later) and the writing disjointed and awkward but I found so many spelling and grammatical errors it was ridiculous – I started underlining them all but by the time I’d reached twenty or so I gave up. I’ve never read a book so filled with errors and, if I had been enjoying the story, I think it really would have ruined my reading experience.

Unfortunately my reading experience was ruined when I first cracked the spine. My main issue with Scarred is probably Willow. She’s just so unlikeable. She’s gone through a huge trauma and I’m well aware that would have some impact on your personality but, really, the girl is hateful. I’ve never come across a protagonist so self-involved, self-deprecating and, to be put bluntly, whiny. So whiny. I would have respected her a lot more if she’d held her head high, acknowledged that she’s in a devastating period of her life but tried to move on. But no. Oh, no, no, no, not our Willow. Instead, she becomes so self-obsessed that she comes out with little gems like this:

‘Cathy buries her head in Isabelle’s hair and gives her a kiss. It’s a natural gesture, but Willow wonders if she’s doing it just to avoid looking at her.’

No, bitch, I’m pretty sure that’s just a mother kissing her daughter. Of course, in Willow’s head a mother expressing love for her daughter is a bloody great ruse so she doesn’t have to look at her. Really? REALLY? Honestly, at that point I gave up trying to find anything good in this book. At some points I almost thought the whole thing was a joke. How could I possibly take a character like that seriously?

But in Scarred we don’t only have Willow to deal with. Oh, no. We also have the originally named Guy, Willow’s love interest (I trap you in bookshelves because it’s romantic/I’ve known you for five minutes but I really, really do love you) and her brother David, who sits in the dark and cries a lot. Maybe I’m being a bit harsh on David actually. His grief is written a lot more subtly and, for me, that worked much better than Willow’s insane Bella Swan ‘I killed my parents’ melodrama. No, Willow, we established right at the beginning you didn’t murder your parents.

I want to address the cutting itself. This is what made me go from rolling my eyes to being genuinely angry. I’m sorry if some people found the self harming a realistic portrayal but for me and my personal experiences, it just didn’t work. I felt absolutely no sympathy for the girl. She spends the entire book talking about how she’s cutting so deep because she has nothing to live for and wants to die. Well, that’s clearly a lie. If you want to read a much more realistic and delicate portrayal of self harming then I’d point you in the direction of Entangled by Cat Clarke. Much better. Less whining.

There are so many books about teenage ‘issues’ floating around out there that, personally, I just don’t think the market has space for a book like Scarred. It doesn’t make the cut (ho ho ho, what a funny joke I accidentally just made. I’m leaving it in) when there are absolutely stunning books like Wintergirls, Speak, Breathing Underwater and Girl Interrupted that write so sensitively and unassumingly about these issues.