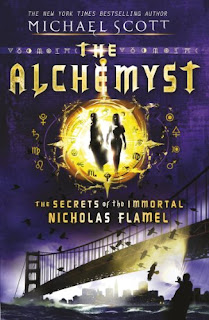 Summary (from Goodreads): He holds the secret that can end the world. The truth: Nicholas Flamel was born in Paris on September 28, 1330. Nearly 700 years later, he is acknowledged as the greatest Alchemyst of his day. It is said that he discovered the secret of eternal life. The records show that he died in 1418. But his tomb is empty. The legend: Nicholas Flamel lives. But only because he has been making the elixir of life for centuries.

The secret of eternal life is hidden within the book he protects; the Book of Abraham the Mage. It's the most powerful book that has ever existed. In the wrong hands, it will destroy the world. That's exactly what Dr. John Dee plans to do when he steals it. Humankind won't know what's happening until it's too late. And if the prophecy is right, Sophie and Josh Newman are the only ones with the power to save the world as we know it.

Sometimes legends are true. And Sophie and Josh Newman are about to find themselves in the middle of the greatest legend of all time.

My review: Well I’m going to be honest and say the only time I’d heard of Nicholas Flamel before reading this book was in Harry Potter and the Philosopher’s Stone and I thought he was a really intriguing character so it was great to read more about him and his wife in The Alchemyst.

While my favourite genre of YA may be preppy contemporary young adult, I do like to change things up every so often so this series is perfect for me to try something a little outside of my comfort zone.

Our two protagonists, Sophie and Josh, are both really likeable and I felt as though I knew them within the first couple of chapters which was a great advantage as the plot does quickly pick up speed and it would have been easy for their personalities to be overshadowed by the storyline.

I thought it was really interesting to learn more about Nicholas Flamel and his wife Perenelle as people, rather than just legendary characters from the past who pop up in literature every now and then. I really liked that Perenelle is her own person and so much more than just Nicholas’ wife – I’m excited about learning more about her as the series progresses.

While the Alchemyst is a great book, I think it’s clearly the first in a series and does set a lot up for the books that come after it – though this isn’t necessarily a bad thing I do quite like it when part of a series can also work as a standalone. That said, I was completely drawn into the fantastic world that Michael Scott has created for this series of books and my review of the second instalment will be coming very soon as I had to dive straight into it after finishing The Alchemyst.

First line: ‘“OK – answer me this: why would anyone want to wear an overcoat in San Francisco in the middle of the summer?”’

Read if you liked...: Percy Jackson and the Lightning Thief by Rick Riordan