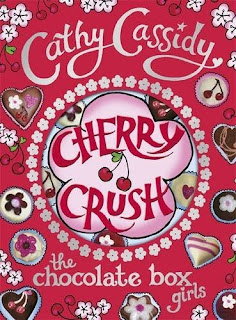 Acquired: Sent for review by Puffin

Summary (from Goodreads): Cherry Costello’s life is about to change forever. She and Dad are moving to Somerset where a new mum and a bunch of brand-new sisters await.

And on Cherry’s first day there she meets Shay Fletcher; with suntanned skin and sea-green eyes, he’s the kind of boy who should carry a government health warning. But Shay already has a girlfriend, Cherry’s new stepsister, Honey.

Cherry knows her friendship with Shay is dangerous – it could destroy everything. But that doesn’t mean she’s going to stay away from him...

What I liked: Cherry Crush is the latest novel from the amazing Cathy Cassidy, who can’t seem to ever put a foot wrong. She has legions of young fans and it’s all thanks to her trademark writing style and Cherry Crush is more of the same – fun, light hearted and entertaining. She’s done it again.

I was a little bit overexcited at the fact Cherry Crush is set in Somerset, I’ve spent pretty much my whole life in the county and just because I’ve moved a couple of miles across the border into Wiltshire doesn’t mean I don’t consider myself a Somerset girl through and through. Yes, we do drink a lot of cider.

Each of the books in the Chocolate Box Girls series focuses primarily on one of the characters and if this instalment we’re focused on Cherry, who has just moved to Somerset to live with her new stepmother and stepsisters. Scary. I think the mixture of unease and excitement that Cherry feels about the big move is written very well and it was easy to relate to her situation – I know if I’d been uprooted when I was younger I definitely would have gone through the same emotions Cherry goes through.

Cherry’s stepsisters do have their great moments but I did feel as if they all blended into one every now and then. I couldn’t always distinguish who was who and from time to time it did seem as though Honey was the only one who was paid any real attention and that’s only because of the love triangle with herself, Cherry and Shay.

I do have to say, as well, that the synopsis of the novel makes it sound slightly older than it actually is. At first I was prepared for a full on affair between Cherry and Shay but as this one is aimed at younger teens it didn’t quite turn out that way – however, Cassidy clearly knows her audience perfectly and I commend her for that.

Cherry Crush a solid addition to the Chocolate Box Girls series and I’m sure this one will delight Cassidy’s existing fans and definitely earn her a whole host of new ones – I know I’m converted!

First line: ‘There are some things I will miss about Clyde Academy...things like macaroni cheese and chips, and syrup pudding with custard, and staring at the back of Ryan Clegg’s neck in art class.’

Read if you liked...: The Georgia Nicholson Diaries – Louise Rennison