Review: Diary of a Chav: Slinging the Bling - Grace Dent 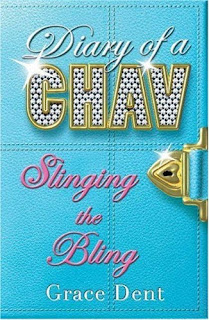 Summary (from Goodreads): The divine Shiraz Bailey Wood is back to enlighten us on the multi-layered, rich tapestry that is her life in Goodmayes Essex. Shiraz is astonished to discover that she has passed eight GCSE's and is actually clever! Emboldened, she decides she can't waste her brain power on a job at 'Mr Yolk', the local greasy spoon. No, she'll stay on at the Mayflower Sixth Form 'Centre of Excellence' and get even brainier.

Best friend Carrie is of a like-mind and so, armed with text books and pencil cases, the intrepid pair set forth into the heady world of academia. Soon Shiraz is hanging out with other boffin types, amongst them the gorgeous Joshua, with the sharp cheekbones and the whopping allowance. But will Shiraz really dump the devoted Wesley Barrington Bains II for a smooth-talking lad with an Oxbridge future? Read SBW's hilarious, heart-rending, irresistible diary to find out...

My review: So I reviewed the first instalment in the Diary of a Chav series yesterday and if you checked it out you would have seen how much I loved the first book. I’ve read a few reviews criticising the book for ‘taking the piss out of chavs’ but I have to say I really do disagree and I honestly think that’s only an opinion you’d have before actually delving into the book. Sure, Shiraz and her friends do conform to the ‘chav’ stereotype but Dent writes them as real people with real problems, rather than one dimensional hoodies.

Slinging the Bling is number two in the series and I really enjoyed this one too. Shiraz and co are back and better than ever. After receiving their GCSE results more students than expected return to the Mayflower Sixth Form ‘Centre of Excellence’ to study for their A-levels.
Slinging the Bling picks up from where Diary of a Chav left off – Shiraz is still with Wesley Barrington Bains II, Carrie is still a dreamer and Uma still has a fridge in her front garden. However, after Shiraz meets the enigmatic and ‘proper posh’ Joshua Fallow at Sixth Form she begins to question her relationship with Wesley – will things ever been the same for Shiraz Bailey Wood?

I love that Dent explores the secondary characters more in Slinging the Bling than she did in Diary of a Chav. I did mention in my earlier review that I wanted to see more of Kezia and Uma in particular and these are to characters who are really looked at in closer detail. I really liked Uma by the end of the book and there were some really touching scenes between her and Shiraz that made me feel bad about immediately assuming that she was the ‘token pikey’ character cast by Dent.

I’ve got the third instalment in the series, Too Cool for School, on my bookshelves so I’m pretty sure that review will be coming soon. I’ve also picked up Diary of a Snob, which I’ve read the first few chapters of and already love! Hooray for Grace Dent!

First line: ‘I am the master of my own destiny.’

Read if you liked...: Diary of a Chav – Grace Dent