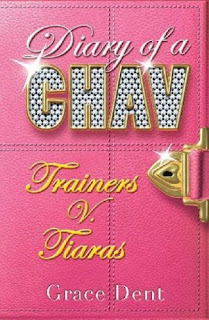 16-year-old Shiraz Bailey Wood's days are filled with hoodies, hip-hop, and hanging around outside Claire's accessories. Her parents work crap jobs and her school is pretty much chav central. There's not much goin' on in the world of this lovable dreamer, and having a brain and a heart of gold only makes it worse.

Shiraz loathes being called a chav because she may be poor but she's not trashy, but she can't do much about it--yet. Shiraz is beginning to feel there's a lot more to life than minimum wage and the bling of a souped-up Vauxhall Nova. Told in diary entries over the course of a year attending the unfortunately named "SuperChav Academy" (where she'll do anything to prove she's NOT a chav), Shiraz's insanely funny voice and spirited narrative s how there is always a way to rise above any obstacle.

My review: Honestly, Diary of a Chav is probably the funniest book you will read this year. Admittedly, it was published back in 2007 so you may well have already read it but still – this book is absolutely hilarious.

I’m a big fan of Grace Dent but it wasn’t until this week that I actually read any of her fiction writing. I really wanted to love her work and I’m so glad I enjoyed Diary of a Chav. Dent creates such a brilliant community for her characters and everything was so visual – I could see Uma’s house with the fridge in the front garden, I know exactly what Shiraz’s overweight staffy looks like when she’s begging for Pringles and I could hear the latest ‘choon’ by the G-Mayes Detonators in my head (note: it wasn’t good).

Though there are a lot of stereotypes in Diary of a Chav and yes, stereotypes are bad and we shouldn’t judge but, I’m sorry, this book is too hilarious for me to get caught up in political correctness. Dent gets the dialogue absolutely spot on and there are definite hints of Vicky Pollard in Shiraz and Carrie’s speech, though with a touch more eloquence. My case in point:

‘…I’m not sure how we even has a job himself let alone a job telling everyone else how to get a job, but I didn’t say that to his face ‘cos I did what Mrs Radowitz said and thought through quietly in my head how that sounded and I reckon it probably was ‘prejudicial’ and ‘stigmatizing’ towards folk who just happen to look a bit like paedos but who aren’t.

'Everyone else in 10W had something worked out to tell Mr Brightwell, aside from me. Carrie reckons she wants to be a nail technician and tanning supervisor like Collette Brown at Cheeky’s and Luther Dinsdale wants to start his own grime collection ‘cos he’s got some pretty good rhymes and his dad knows people who have a recording studio in Stratford and run a pirate called RUDE FM so he reckons he can get a slot. Kezia wants to be a singer ‘cos she always does karaoke at Goodmayes Social Club and once won fifty quid of Iceland vouchers and everyone said she should go on X-Factor.’’

There are no frills in Diary of a Chav, no extensive subplots, no twists or turns, just a great story that’s entertaining from beginning to end. If you’re in a bad mood then this is the perfect antidote, you simply can’t read one of Shiraz’s rants without breaking into a smile. I promise.

That said, this is a story with heart and there were some really sweet touches in the novel. When Shiraz realises that she ‘isn’t so thick’ and may actually be good at something it’s a really nice moment. And I really wanted to get to know more about Uma and Kezia’s situations as there seemed to be a lot more going on with those two than it first seemed. I’ve now read the second book in the series and can reveal that you do learn more about Uma and Kezia in that instalment – good stuff.

I'd be really interested to see what international readers think of Diary of a Chav so if there are any readers outside of the UK who have read it - do let me know your thoughts!

First line: ‘So much for ramming the word iPod into every sentence since last June.’