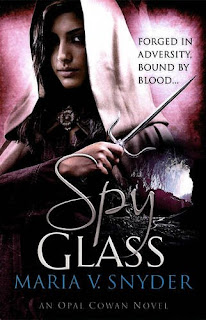 Acquired: Sent for review by Mira

Summary (from Goodreads): An undercover mission leads to danger, adventure and an impossible choice...

After siphoning her own blood magic in the showdown at Hubal, Opal Cowan has lost her powers. She can no longer create glass magic. More, she's immune to the effects of magic. Opal is an outsider looking in, spying through the glass on those with the powers she once had, powers that make a difference in the world.

Suddenly, the beautiful pieces she makes flash in the presence of magic. And then she discovers that someone has stolen some of her blood - and that finding it might let her regain her powers. Or know it could be they are lost forever...

What I liked: My main criticism of Sea Glass is that it was a little too short to properly explore the storyline so I was pleased to see that Spy Glass was significantly longer, leaving a lot more room for Snyder to develop the final instalment in the Glass series.

It seems as though every element of Spy Glass was stepped up from the two books that came before it. The plot was far more complicated and there were so many twists and turns that I read Spy Glass in a couple of exhausting sittings. There were so many characters included in this book that I almost lost count – I had no idea who was genuinely fighting Opal’s corner and who was going to turn around and stab her in the back. Phew!

If you look back at who Opal was at the beginning of Storm Glass it’s fascinating to see how much she’s changed as her story has unfolded. I always love to see a real transformation in lead characters throughout a series and Opal definitely goes on quite a journey in the Glass series.

I know some people weren’t happy with how Opal’s love life turned out but, personally, I was pretty chuffed and think she made the best choice. Of course I won’t give anything away to those of you who haven’t yet read the series but if you have read the books, do you agree or did you want to see a different outcome?

What I didn’t like: I mentioned earlier in my review that there are so many characters included in Spy Glass that I almost couldn’t keep up. I did have a few problems with the characterisation in this book. I said in my review of Sea Glass that I really enjoyed getting to know the characters better but in Spy Glass there were quite a few characters who were included but barely given any attention so they never really found their own identities or had any lasting impression on me, which is a shame.

First line: ‘Crouching in the darkness of the closet, I stilled as footsteps approached.’