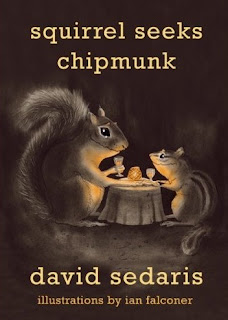 Summary (from Goodreads): Featuring David Sedaris's unique blend of hilarity and heart, this new collection of keen-eyed animal-themed tales is an utter delight. Though the characters may not be human, the situations in these stories bear an uncanny resemblance to the insanity of everyday life.

In "The Toad, the Turtle, and the Duck," three strangers commiserate about animal bureaucracy while waiting in a complaint line. In "Hello Kitty," a cynical feline struggles to sit through his prison-mandated AA meetings. In "The Squirrel and the Chipmunk," a pair of star-crossed lovers is separated by prejudiced family members.

Once again David Sedaris shows us the most outrageous, tender, absurd sides of ourselves in his "profoundly funny, well-crafted stories that somehow, magically, bring home a major point about fidelity or guilt or love.”

My review: Squirrel Seeks Chipmunk is certainly not my standard read. It’s probably not yours either. Sedaris writes about a host of creatures that are put in human situations, which helps to highlight just how ridiculous some aspects of modern day life have become. In Squirrel Seeks Chipmunk we see toads, turtles and ducks arguing about racism, a mouse kidnapping and killing baby animals to feed its hypnotic pet snake and a very vigilant rabbit take health and safety to the extreme (apparently a unicorn’s horn is a dangerous weapon nowadays).

Some of the stories may be offensive to some readers so do approach with caution. Just because a fluffy bunny has been put in charge of guarding the forest don’t think he’ll go easy on you. No, there’s bloodshed aplenty in ‘The Vigilant Rabbit’ and if you have a ‘thing’ about eyes then I’d advise you steer clear of ‘The Crow and the Sheep’. Honestly, I thought I was going to do a little sick at the end of that one.

So while there might be violence, foul language and stories rife with goats getting drunk at Bar Mitzvah’s there is actually a moral in each of the tales. In ‘The Squirrel and the Chipmunk’ we learn that you should follow your heart when it comes to love and after reading ‘The Motherless Bear’ I’m sure as hell not going to wallow needlessly in self-pity again! Some of the stories are actually quite touching and I have to admit that I did feel myself welling up at the end of ‘The Squirrel and the Chipmunk’.

‘Squirrel Seeks Chipmunk’ isn’t like anything you will have read before, that I can assure you. If you’re a fan of short stories and like your prose with a bit of bite then I can definitely recommend it. I loved it and will be checking out some of Sedaris’ other work shortly.

First line: ‘The cat had a party to attend, and went to the baboon to get herself groomed.’

Read if you liked...: Just So Stories by Rudyard Kipling with added drugs and murder.