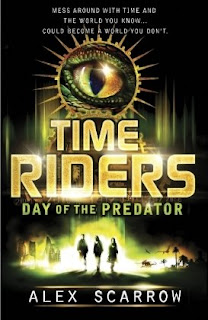 Acquired: Sent for review by Puffin

Summary (from Goodreads): Liam O'Connor should have died at sea in 1912. Maddy Carter should have died on a plane in 2010. Sal Vikram should have died in a fire in 2029. But all three have been given a second chance - to work for an agency that no-one knows exists. Its purpose - to prevent time travel destroying history.

When Maddy mistakenly opens a time window where and when she shouldn’t have, Liam is marooned sixty-five million years in the past in the hunting ground of a deadly – and until now – undiscovered species of predator.

Can Liam make contact with Maddy and Sal before he’s torn to pieces by dinosaurs – and without endangering history so much that the world is taken over by a terrifying new reality?

My review: So I’ll preface this review by saying that I haven’t read the first instalment in the Time Riders series so I’m reviewing Day of the Predator as a standalone novel.

I’ve always been interested by time travel so I was really excited to read Day of the Predator. Of course we all know that the most important element of time travel is making sure that nothing is changed in the past, as even the tiniest change can have a profound effect on the future. So, when Liam is sent back in time to the era of the dinosaurs, it became apparent that we were going to be in for some exciting action.

Time travel and dinosaurs and certainly enough to make me happy but, aside from that, we also see great characterisation here. I feel as though I knew Liam, Maddy and Sal much better by the end of the novel and I feel like Scarrow worked hard to create three really vivid characters with distinct personalities.

The storyline in Day of the Predator is fast paced, to say the least. Time is running out for Liam and he has to make contact with Maddy and Sal before it’s too late, all the while trying to avoid being mauled by dinosaurs or touching anything that may create a new reality.

I loved the idea that Liam making a small change in the past could mean the world is taken over by a new reality and Scarrow explores this point really well in Day of the Predator. I found myself literally holding my breath towards the end of the story and it roared to a truly exciting denouement that has stuck with me long after finishing the book.

Although the Time Riders series isn’t something I would necessarily have immediately chosen to read, I’m really glad I gave Day of the Predator a chance and I’ll definitely be looking out for the third instalment, which is due out early 2011.

First line: ‘They’d heard the rumbling coming towards them down the echoing stairwell like a locomotive train.’