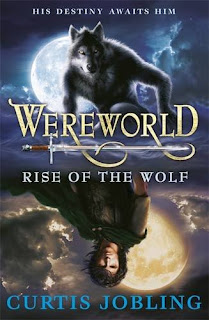 Summary (from Goodreads): ''You're the last of the werewolves son. Don't fight it...Conquer it'. When the air is clear, sixteen year-old Drew Ferran can pick up the scent of a predator. When the moon breaks through the clouds, a terrifying fever grips him. And when a vicious beast invades his home, his gums begin to tear, his fingers become claws, and Drew transforms ...

Forced to flee the family he loves, Drew seeks refuge in the most godforsaken parts of Lyssia. But when he is captured by Lord Bergan's men, Drew must prove he is not the enemy. Can Drew battle the werecreatures determined to destroy him - and master the animal within?'

My review: When I first received a copy of Wereworld: Rise of the Wolf to review I have to admit I wasn't 100% sure whether I would enjoy it or not. The book looked great and I liked the idea of the plot but I'm just not a huge fantasy fan - a few of the fantasy books I've read I've absolutely adored but there are an equal amount that I haven't been able to gel with so I do tend to approach fantasy with caution. However, within the first few pages I relaxed into the story and world of Lyssia and was completely drawn in. Wereworld: Rise of the Wolf is the kind of fantasy that I really enjoy.

Drew was an instantly likeable protagonist and the writer did a brilliant job of tugging at the readers’ heartstrings when Drew has to leave his family – it comes relatively close to the beginning of the book when I hadn’t had a chance to get to know Drew particularly well but I really did feel for him.

The action in Wereworld: Rise of the Wolf was great; fast-paced and exhilarating, I could really see this working well on the big screen. The back cover of the book describes it as ‘The first in an epic fantasy series’ and it definitely was epic. Everything seemed to be bigger and better than I imagined when I first laid eyes on the book and this one was a really pleasant surprise.

The cover art of this book is another thing I liked about it – sure, it’s less important than the actual content but it’s just another positive. I love the split screen design and it looks more modern and accessible than a lot of epic fantasy covers so I think this will help the book reach a wider audience.

I don’t want to go too much into the plot for fear of revealing too much but if you like your fantasy big, bold and well-written then I’d nudge you in the direction of the Wereworld series. Even if you’re not a huge fantasy buff (I know I’m definitely not) then you should give this one a go – I’m so glad I did and I’m eagerly awaiting the next instalment!

First line: 'Drew knew that there was a predator out there.'

Rating:
Plot: 4/5
Writing: 3.5/5
Characters: 3.5/5
Cover: 4/5
Total: 15/20 (B)
For more information about Curtis Jobling and the Wereworld series check out the author's website here and check out the awesome trailer below: