Review: Diary of a Chav: Too Cool for School - Grace Dent 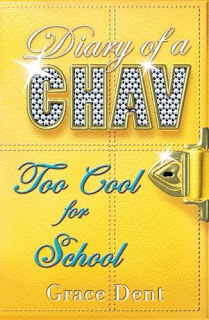 Now all Shiraz has to focus on is getting herself a job. She has a bit of trouble finding the most suitable job mind, nothing seems quite right for a girl of Shiraz's originality and wit...And she has to admit, she's missing her family - even Murphy - something rotten. But Shiraz BW will not give up - she's going to finish what she started, even if she does keep looking out of the crappy flat window to see if there's a Banana Yellow Golf parked up front…

My review: I honestly can’t get enough of the Diary of a Chav books, I really can’t. I reviewed the first two a couple of weeks ago and I’ve got the rest of the series already stacked up on my shelves, ready to read. There’s something about Dent’s way with words that really hits the right spot for me. The stories in each diary are fun, light hearted (most of the time) and easy to read. For me, the Diary of a Chav books are perfect to kick back and relax with. I love them.

In Too Cool for School (book three) Shiraz has moved out of 34 Thundersley Road and is leaving Goodmayes to live it up with her best friend Carrie in London, while Carrie attends the Butterz to Babe Beauty School. As expected, chaos ensues. Shiraz doesn’t have a job or any way of supporting herself but, teamed with her new pal Danny (who conveniently works for a recruitment company) she manages to find work.

Obviously, though, Shiraz has to ‘keep it real’ at all times, which sees her get fired from various jobs (I think my favourite is the tour guide for the London Eye) before she actually manages to fall on her feet and discover her new calling in life as a wannabe journalist.

As usual, Shiraz and Carrie are joined by a fantastic supporting cast of characters, including Kezia, Sean and, my favourite, Uma. Uma is brilliant, she’s such a well-rounded character and I love that she refuses to live up the stereotype that comes with her surname. She’s excellent and I’m really glad she becomes a main character in Too Cool for School.

Of course, Shiraz’s relationship with Wesley Barrington Bains II is featured in the book – even though it’s now been going on for three books I still love the will they/won’t they element of the story and I have faith that they’ll end up together!

One of the things I love about these books (and I think I mentioned it in one of my reviews of the other books) is that, while they are laugh out loud funny, they do also deal with some important issues. We have Uma’s family, for example, who are explored in more depth here and also post-natal depression, which I found a really interesting addition.

I’m a huge fan of Grace Dent’s – I just think the Diary of a Chav books keep getting better and better. I’m now on the fourth book (the girls hit Ibiza – you can imagine) and it’s brilliant. Happy days.

Read if you liked...: Diary of a Chav books one and two – Grace Dent

Labels: Diary of a Chav, Grace Dent, Review, Too Cool for School