Review: When I Was Joe - Keren David 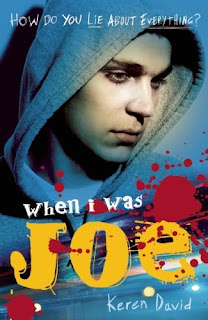 Part of a series?: Yes, the second installment (Almost True) is out now

Summary (from Goodreads): When Ty witnesses a stabbing, his own life is in danger from the criminals he's named, and he and his mum have to go into police protection. Ty has a new name, a new look and a cool new image -- life as Joe is good, especially when he gets talent spotted as a potential athletics star, special training from an attractive local celebrity and a lot of female attention. But his mum can't cope with her new life, and the gangsters will stop at nothing to flush them from hiding.

Joe's cracking under extreme pressure, and then he meets a girl with dark secrets of her own. This wonderfully gripping and intelligent novel depicts Ty/Joe's confused sense of identity in a moving and funny story that teenage boys and girls will identify with - a remarkable debut from a great new writing talent.

My review: Well I have to start by apologising for the delay in getting this review up. I actually wrote and scheduled it months ago (or so I thought) but I’ve realised it was only saved as a draft, along with a bunch of other reviews which I will repost!

When I Was Joe is one of the books that everybody (or, almost everybody I guess) seems to love. It’s very hard to find a bad review of the book which, in my opinion, must be a good thing but with so much hype, does the book live up to it?

Yes, it does. For me, at least. I really, really enjoyed When I Was Joe, more than I thought I would actually. I thought it might be a little too ‘gangster’ for my delicate country village brain to digest but I absolutely loved it. Of course there are elements that aren’t particularly pleasant to read about (as the summary suggests knife crime and gang violence feature heavily) but David writes them brilliantly.

Ty is a great character and instantly likeable. I bonded with him from the outset and really cared about what happened to him as the story progressed, which I think is always so important. To keep up with his new persona as ‘Joe’ he has to tell lie after lie. Eventually they begin to spiral out of control and mount up on him – after telling so many lies how can he stop, how can he try to live a normal life when his entire existence has become a lie? Well, you’ll see.

It was great to read a story told from the point of view of a witness to a crime – so often we’ll hear the story of the attacker or the victim but personally I’ve never come across a book that tells this kind of story. I love it when a book brings a fresh idea to the table and When I Was Joe certainly does that.

The mystery was something I loved unravelling as well – who is hunting Ty and his mum, what exactly was the crime that Ty witnessed? Brilliant. You’ll love it.

First line: It's one thing watching someone get killed. It's quite another talking about it

Read if you liked: iBoy – Kevin Brooks (for the tone, rather than content)

Labels: Keren David, Review, When I Was Joe