With illustrated interstitials from comic book artists Hope Larson and Bryan Lee O'Malley, Geektastic covers all things geeky, from Klingons and Jedi Knights to fan fiction, theater geeks, and cosplayers. Whether you're a former, current, or future geek, or if you just want to get in touch with your inner geek, Geektastic will help you get your geek on.

Why it's on my wishlist: Well, just look at the list of authors involved! This should be on everybody's wishlist! 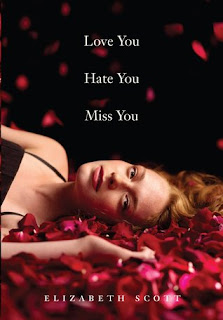 Love You, Hate You, Miss You - Elizabeth Scott

Summary (from Goodreads): "Get this, I'm supposed to be starting a journal about "my journey." Please. I can see it now: Dear Diary, As I'm set adrift on this crazy sea called "life" . . . I don't think so."

Amy's shrink thinks it would help to start a diary. Instead, Amy starts writing letters to Julia. But as she writes letter after letter, she begins to realize that the past wasn't as perfect as she thought it was—and the present deserves a chance too.

Why it's on my wishlist: I've just started reading my first ever Elizabeth Scott novel (yes, I know, I'm behind the times!) and I'm already in love with her writing style so I'm eager to try out a few more of her books.

Summary (from Goodreads): One pregnancy. Four friends. It all adds up to a profound time of change in this poignant, sensitively written YA novel.

Ellie remembers how the boys kissed her. Touched her. How they begged for more. And when she gave it to them, she felt loved. For a while anyway. So when Josh, an eager virgin with a troubled home life, leads her from a party to the backseat of his van, Ellie follows. But their "one-time thing" is far from perfect: Ellie gets pregnant.

Josh reacts with shame and heartbreak, while their confidantes, Caleb and Corinne, deal with their own complex swirl of emotions. No matter what Ellie chooses, all four teenagers will be forced to grow up a little faster as a result. Told alternately from each character’s point of view, this deeply insightful novel explores the aftershocks of the biggest decision of one fragile girl’s life — and the realities of leaving innocence behind.

Why it's on my wishlist: This sounds brilliant. Right? I'm super excited about it so I think I'm definitely going to crack and order it soon. Plus, I really love the cover.

*
(Note: Apologies if somebody has already coined this feature title but I honestly couldn’t think of anything else more appropriate – if you named a feature ‘On My Wishlist’ and want me to credit you or change mine then just let me know!)
Posted by CarlyB at 16:00