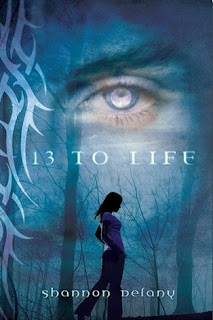 Series?: Yes, the second and third books (Secrets and Shadows and Bargains and Betrayals) are due out this year

Acquired: Sent for review as part of UK Book Tours

Summary (from Goodreads): Everything about Jessie Gillmansen’s life changed when her mother died. Now even her hometown of Junction is changing. Mysterious dark things are happening. All Jessie wants is to avoid more change. But showing a hot new guy around Junction High, she’s about to discover a whole new type of change.

Pietr Rusakova is more than good looks and a fascinating accent—he’s a guy with a dangerous secret. And his very existence is sure to bring big trouble to Jessie’s small town. It seems change is the one thing Jessie can’t avoid…

My review: I’d read a lot of good things about 13 to Life on various blogs before I read the story and I have to say I had pretty high expectations. I was a little disappointed with the story but I think it’s a solid debut and I’m excited to see how the rest of the series pans out.

Jessie’s life is already complicated and filled with mystery but when ‘hot new guy’ Pietr shows up at her high school and she’s assigned as his guide things get a whole lot more tangled.

Jessie and Pietr’s strained relationship was one of the highlights of the book. They have great chemistry and bounce off each other well, despite Jessie’s frustration with the boy. She would much rather spend her time swooning over her crush, Derek. Even though I didn’t feel a particularly strong connection to either love interest I really didn’t see what was so attractive about Derek.

Of course we’re told he’s completely gorgeous etc etc but, yet again, he’s one of those love interest who is just there to look pretty and never actually develop a personality. It’s my problem with Daniel in the Fallen series and numerous other novels that have come out in the last year or so.

Anyway, back to the story. Dark things are happening in Jessie’s town, Junction, and ever since Pietr showed up there are more and more strange occurrences. While the first two third of the book moves a little slowly the pace does pick up as the novel draws to a close.

Like I said, I was a little disappointed with 13 to Life but I think that could be a lot to do with the fact it’s the first book in the series and there was a lot of set up to do. I did like Delany’s style of writing so I’ll definitely be checking out the next instalment to see if we get some answers to the questions raised in 13 to Life. It would be great to find out more about some of the secondary characters as well so I hope they’re given a little more page time.

First line: ‘Rio stiffened beneath my touch, striking a glossy hoof against the floor.’