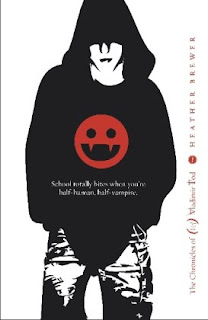 Published: January 3rd 2011, Razorbill
Pages: 182 pages, paperback
Series?: Yes, this is the first instalment. Ninth Grade Slays is already out in the US and is due to be published in the UK next month
Acquired: Sent for review

With no idea of the extent of his powers, Vlad struggles daily with his blood cravings and his enlarged fangs. When a substitute teacher begins to question him a little too closely, Vlad worries that his cover is about to be blown. But then he faces a much bigger problem: he's being hunted by a vampire killer.

My review: I’d read quite a few reviews of various Vladimir Tod books on the US blogs and was itching to get my hands on the first instalment, so when Eighth Grade Bites plopped through my letter box I was excited to get started.

The tag line of ‘High school totally bites when you’re half-human, half-vampire’ tells you all you need to know about Vlad Tod and the book does exactly what it says on the tin. It’s modern, it’s funny and it’s obvious that this series is going to be just as successful over here as it has been in the US.

While trying to deal with blood cravings and fangs Vlad also has to deal with generic high school problems – girls, bullies and homework. Oh, and a vampire killer is hunting him. Great.

First line: ‘A tree branch slapped John Craig across the face, scraping his skin, but he kept on running and ignored the stabbing of pine needles on his bare feet.’

Read if you liked…: Diary of a Wimpy Vampire – Tim Collins